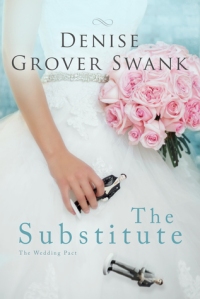 Megan Vandemeer was in trouble. She had found her fiance cheating and immediately broke up with him. The trouble was she hadn’t told her mother about breaking up with Jay and the wedding was now only a few days ago. Megan will find a solution when a man she met on the plane ride will volunteer to help.

Josh McMillan was going to Kansas to find out who really stole his patent before the deadline was too late. His plan was to get close to Vandemeer and as luck would have it he would meet a Vandemeer on his plane to Kansas, except it was the daughter. His plan will change as he volunteers to help the daughter, but Josh will soon be in way over his head.

The Substitute is the first book to the series Wedding Pact by Denise Grover Swank. I really loved this book, it was cute, fun, and a little crazy. I will admit that it was also very predictable but I really didn’t mind that. I was just enjoying the story.

The concept of the story is that three friends were told that the men they were going to marry would not happen and that there would be another man who would come into each of their lives. So Megan is first of the friends whose wedding will have a problem I liked Megan’s character. She was a good person who had a lot of things going for herself except she was afraid of her mother. It wasn’t that the mother was bad but she could be judgmental. The mother gets better and you find out a little information that helps you like the mother a lot more. Then there was Josh’s character. I liked him for all his planning and you knew he was not a bad guy or even malicious. He will be lying to why he was really helping Megan, but he was trying to help his employees keep their job. So the attraction between them is almost instantaneously. They fight it but with close proximity there is no help for them.

The friends, Blair and Libby, of Megan were polar opposites of each other. They had their own parts in the book whether they were helping or hindering the crazy scheme of Megan. I liked her friends and I know that I will enjoy reading their stories.