Helena, Countess of Crewe, had gone through nine years of marriage to a man she loathed. She wanted to be free and to just live her life. She did not want to find another man to be with but Lord West will tempt her with wanting more.

Vernon Grange, Lord West, has loved Helena but was too young to realize it at the time. After ten years West was finally going to pursue Helena and would not stop until she was his.

Winning Lord West is the third book to the series Dashing Widows by Anna Campbell. I really liked this story. I had been waiting for Helena and West because there was always that connection between them.

The plot surprised me with West. You knew that he wanted Helena and that he wanted marriage because he loved her, but West had gotten sick while in Russia. I was really hoping that the sickness wasn’t going towards a premature death for West. What I liked with West was that he did put his heart on the line with Helena. He pursued because he truly loved her. I also liked that Campbell went back to the picnic that was in the first book which let you see what was said between West and Helena. So Helena’s character is very much a woman who doesn’t want to be with anyone because she had enough hurt for the last nine years. She didn’t want to open her heart up again. I liked that she was brave to do just that and because of that she became a stronger woman emotionally.

There is an epilogue which goes into what is happening several years later. I like it when authors do that so as the reader I know a little more on the characters and whether they are happy or not. Overall this was a really good series to read but this series is not over as I had thought. There is another book out Pursuing Lord Pascal which I will be reading soon. 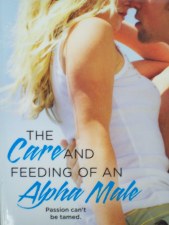 Beth Ann Williamson was done with her ex-fiance but no one in the town believed her. She was getting tried of it and when she finds herself stranded she will be bold and ask for a one night stand with Colt Waggoner. No one would believe that she would associate herself with him and she is even more surprised with the passion that flares between them.

Colt Waggoner was ex-military and hated that he had to quit due to injury. He will be even more pissed when he has to rescue the towns princess, Beth Ann. Colt will be shocked that she did not act scared and even more when she asks for a one night stand. Colt will go for it only to be shocked that he wants more.

Beth Ann is not your typical spoiled rich girl. She is determined to make it on her own. I liked the strength she had for herself. She needed to prove that she could do it. Colt was a man who was rough around the edges but was someone you could count on. He makes a mistake and lies to Beth Ann, it was innocent but I knew it would blow up to be a bigger deal as Beth Ann is all about trust.

Once again there is tons and tons of sex in the book. It is fun and steamy between these two characters who were enemies turned lovers. I liked them together as it was sweet and felt real. Now there are obstacles which are namely in the form of one man, Allan. He was a bastard really especially as you find out what he was doing. But he will not stop that ultimate happy ending for Beth Ann and Colt which was a perfect ending for them.

The next story is with Grant who is the third friend of the group and it will more than likely be with Brenna as there is a tension between these two characters. I am going to try and get the book as quickly as I can since I can’t wait to read Grant’s story.

Cassandra Montrose wanted one night and only one night with this man. She knew nothing would come of it but for once she wanted to feel that desire again. Cassandra gives herself to Vincent and the next morning she understands that will never be hers again especially as how Vincent treats her as an after effect but Cassandra will come to a surprise a month later and then she will have the desired route she must take.

Lord Vincent Sinclair wants this woman. Her eyes called to him but after he is done he leaves. This was an arrangement that he did many times but this one time he regrets for a little. One year later she is still on his mind especially when he sees her with something they had created together. Vincent knows he can never marry but he wants to have Cassandra again. He wants her as his mistress but that will not be the easiest task.

As a book telling a story I loved how Julianne MacLean writes her characters to have desires and second thoughts but also just to throw caution to the wind. They are multidimension as characters need to be.

The Mistress Diaries is the second book to the Pembroke Palace series and it was something that pulled you in from the very beginning as MacLean writes a sensual beginning. Of course that is soon left and you are feeling frustrated at Vincent’s behavior as you want a love story but it is far from that at least not in the beginning.

Through the characters you have your loyal family if not mildly crazy father who believes in curses and then your villain who is known quickly. MacLean also gives the reader a true conclusion with the epilogue where you travel through the accomplishments and the future this couple is going to expect which is sweet and befitting.

I am interested to read the first and third book of the series Pembroke Palace to see how they compare to The Mistress Diaries.