After I had finished the last book of the Naked Nobility series I decided it was time to go and read the very first book which started it all. The Naked Duke starts the series which Sally MacKenzie created. 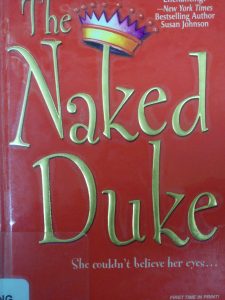 Miss Sarah Hamilton lost the last of her family and had promised to find her uncle. Sarah travels from the colonies to London only to encounter more problems. Her uncle no longer lives and she has a cousin but worst is when she winds up naked in a bed who is also naked.

James, The Duke of Alvord, should have known Robbie would bring a whore to him but for some reason James did not kick her out. Waking up naked to a naked woman stirred James but quickly he found she was not who he thought. James is thrilled at the prospect of marrying this fiery red head but problems will occur when the girl does not feel the same except her action tell a different story.

I was impressed with the plot of the story and the hidden secret which the Duke carried. It was a twist that you wouldn’t think was possible with all the available women which were out there.

Sarah’s character you will love as she is the fish out of water in this society and you fall in love with James when he finds passion with her.

The villain of Richard was dark and disturbed which made the book all more appealing. And of course from reading the books before hand I got to see where characters came from.

The Naked Duke is an excellent novel to begin with the Naked Nobility series and I recommend reading this humorous series.