Christian Duvall was determined to be the Lord of the South. All he needed to do was defeat any challengers as Anthony, the present lord, was stepping down. Although, Christian will find that Anthony will be a lot of trouble especially with the woman Christian wanted.

Natalie Vivant Gaudet was a forensic accountant who was working for Anthony but only because he had blackmailed her. She will be working at the office when Christian walks into the office. Natalie will instantly want Christian and she will do what she can to protect him.

Christian is the tenth book to the series Vampires in America by D.B. Reynolds. I really loved this book. I wasn’t sure how I would like Christian since his sire was Mathilda who was very evil. Christian for me was a character I could easily like. He was a warrior and had good intentions with wanting to be the Lord of the South. He was also very strong, much stronger than any other vampire had known. This helped with the fight scenes which were in the book and the challenges, and those fight scenes were intense. Natalie was a smart woman being a forensic account, which I loved. I thought that in the beginning she was a little too much with the desire for Christian but I of course wanted them together. I did like that she was a woman who could handle herself. She was by no means like Cyn but she could handle some of the bad things that had come her way.

Anthony was a very devious lord. I disliked him right away as he tried to cheat and used his vampire powers to do that. I was horrified that he wanted Natalie and would use his mind control to make her want him. Luckily Christian was a strong enough vampire to stop Anthony before Natalie’s fate was sealed.

I am reading Compelled next.

Raphael and Cyn must face a dangerous situation when someone from Raphael’s past kidnaps him while he is in Hawaii. An enemy from Europe has descended and wants Raphael’s territory.

Deception is the ninth book to the series Vampires in Americas by D. B. Reynolds. I really loved this book. It was intense with Raphael’s kidnapping and how Cyn and the team find a way to save him.

Cyn’s character is once again a bad ass. With every book she is getting more and more blood thirsty. I don’t want her to appear so invincible but I do love the kick ass attitude. She is a woman who would do whatever she needed to protect her mate. I loved that Raphael and Cyn have a connection as that helps them talk to each other in their dreams, which was helpful.

The villain, Mathilda was pretty viscous but really only in the cunning way. She was a woman who liked to get her way and when she didn’t get her way she had a temper tantrum. Mathilda’s way of capturing Raphael was underhanded as she using a lot of vampires and magic. The magic aspect was interesting which it sounds like there will be more with Nick’s character. I had liked Nick in the first book because he was just a guy but I don’t want him causing problems. I just really hope that a love triangle doesn’t happen with Cyn, Raphael and Nick. It is not needed.

I am reading Christian next. 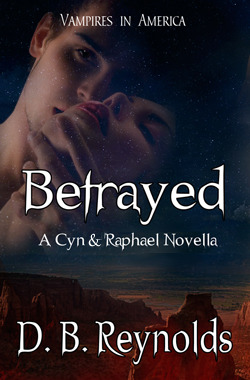 Raphael is one of the most powerful Vampire Lords out there and with one wrong move a war could breakout. Raphael will have to make choices about territorial lines and whether some allies will be strengthened or weakened but there will be an attempt on his life. They will have to find the traitor and stop him.

So I screwed up and read the sixth book first before Betrayed which means I know what has happened as Reynolds talks about the assassination attempt on Raphael. Now we know that it will take a lot to kill this vampire and hopeful the author will not want to kill off Raphael as he is one of the characters I love reading about. I thought that this novella added a good amount of detail considering it was a novella and it was a good intro to the sixth book and the problems that were going to occur. 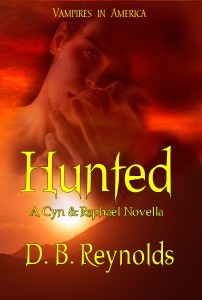 The Vampire Lord of the Midwest has fallen to his death and the new territory is up for grabs. Only the strongest vampire will be able to hold on to this territory. Aden will be wanting the job and by helping the Vampire Lords he will have a chance at the territory but first he will have to get rid of the competition and the one who wants vengeance against the Lords.

I am reading Hunted in the correct order this time. Once I finished Betrayed I started to read Hunted as it comes right after the sixth book. I liked this book as it gives us a good idea of who Aden is but I have a feeling there is much more to this vampire and I can’t wait to find out. So the act of revenge was pretty simple and it was a woman scorned, Magada who was an lawyer for Lucas. She has been angry as he assigned away from him and she wanted him to suffer. She will make the wrong move when Raphael’s mate will be in danger. It doesn’t go well for the lawyer.

So the next book I am reading of D B Reynolds is obviously the last book to the series which I own is Aden. I am excited to read his story to find out more about this man and because it is located in Chicago. I have been waiting for Chicago to be part of the series as I am an Illinois resident. Chicago was where I went a lot as a kid for museums and watching professional football, baseball, basketball and hockey live from the stadium. I am wondering what type of detail she will put in for this book to reference the city. I will find out soon as I am reading the seventh book next.