The second book of the series MacGregors, Tempting Fate, by Nora Roberts.  As the first book showed this series was going to be very entertaining and after reading the second book I knew this would be true.

The Plot of Tempting Fate: 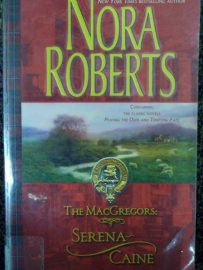 Diane has been well-educated and given everything she needed since she was a little girl of six.  Or at least that is what she was told to believe for twenty years.  Twenty years that were nothing but a lie.  For those years Diane believed her Aunt provided for everything but in reality it was her brother, the brother she thought had abandoned her.  Discovering this fact she was at a lost, she didn’t know who she was anymore.  In a search Diane was going to find out with a little help from the MacGregors whether she wanted it or not.

Caine MacGregor is an amazing lawyer, now in his own practice and he likes to win.  He ends up meeting Diane Blade and is thrown into a stupor.  He knows he wants her and will have her. He sees Diane and knew she is troubled.  Not sure of herself anymore but he will help.  When Diane quits the firm, Caine gets her to rent a room in his office building bringing them closer.

It will be up to Caine to find the woman in Diane that needs to come out.

I loved this book with Caine’s persistance and Diane drive to find herself.  These two characters are fantastic together and I love how the family weaves themselves into the lives.  I love Daniel MacGregor who tells his children to hurry up and give them grandchildren.