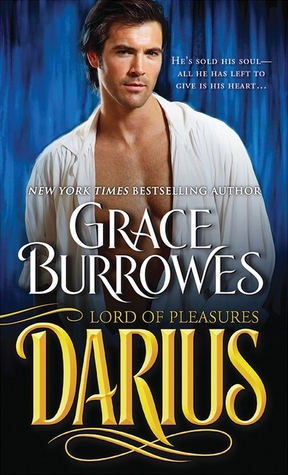 Darius Lindsey has been asked to play stud to Lord William Longstreet’s wife. Darius will accept the offer and accept the money. He will find himself falling for Lady Vivian but knows that it would never work as she is married. He will have to be indifferent and distance himself especially as he will have two women who could cause a lot of harm to his sister and to Vivian.

Lady Vivian does not want to be unfaithful to her husband but he was telling to do so. This was all to produce an heir. Vivian did not want to feel passion but it was something that she could not help when it came to Darius. She will be confused and torn when it was all over as feelings for Darius grew but he now only acted indifferent towards her.

Darius is the first book from the series Lonely Lords by Grace Burrowes. So this series has been on my list for a while. I haven’t gotten to it just for the reason I have had too many others to read. I am trying out this first book and I will say that it is okay. I wasn’t blown away by the plot. The way that Burrowes writes is very good so that is not in question. I like her writing as it is entertaining and the characters have a lot of traits that make them believable. I just wasn’t that into the book as I would have liked.

I didn’t like Darius for how he was treated. How he treated himself and how he was treated by others, especially the two vipers that were the women who attached themselves to Darius. Darius was a good man just in a troubled situation and with him playing stud it only gets worse. Vivian was a dutiful wife who wanted to please her husband. At first I thought she was too soft but she was just a kind person and naive about her life she was living. Having them in that situation a happy ending was almost unthinkable. It does of course happen but it will take some time.