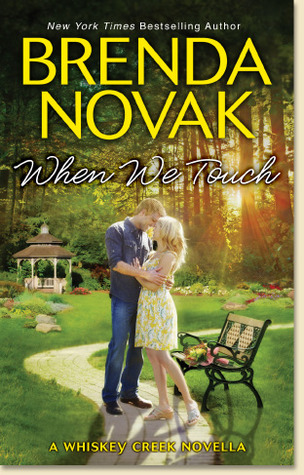 Olivia Arnold wasn’t ready to come home and plan her sisters wedding to the man she thought she would’ve married. Olivia had to hold her head up high and pretend it didn’t bother her. Having Brandon by her side will help her through the ordeal. It didn’t hurt that having Brandon around would make both Kyle and Noelle angry.

When We Touch is the prequel to the series Whiskey Creek. I have read the first book of this series and I really liked it. Its funny that its been a year since I have read anything from this series but I wanted to wait for more of the books to accumulate. Now that they have I have the second book through the sixth to read. I decided to get the first book back out and re-read right after this one which didn’t take me long. I figured that it was a good idea as that was when a lot of the characters were really introduced and you got to know some of their personalities.

I really liked When We Touch. I thought that this novella was well done and to the point. It gave all you the emotions that you wanted, a little heartbreak, betrayal, new beginnings, and love. I liked Olivia’s character but I wanted her to get mad, even though that would only fuel her sister’s, Noelle, happiness. Noelle is a piece of work and there was no redeeming quality in her character. I was happy that in this not so happy marriage will  be coming to an end in the first book. Now the stepbrothers were interesting. I didn’t really like Kyle but it wasn’t like he was a real villain. He made a mistake and now was paying for it. Brandon I really liked as he was a good guy, maybe a little rough around the edges. He wanted Olivia but keeping her was not in his thought process until it became apparent he needed her to be.

I am looking forward to continuing the series with When Snow Falls.