Jackson Stone had found out some life changing news, his whole life had been a lie. Jackson will find three brothers he never knew, one of them was his twin. He will try to make a relationship with them even as they were weary, though he will get some help from Tara.

Tara Kent had finally completed her business degree and had gotten a promotion at work. Her world will change once again when she meets Jackson, Clay’s twin.

Dirty Sexy Sinner is the fourth book to the series Dirty Sexy by Carly Phillips and Erika Wilde. This last book was enjoyable and a good ending to this steamy series.

Jackson’s character was not the rich kid his brothers had thought him to be. He had his own crappy childhood that had not been filled with love. I wanted to give Jackson a hug when his brothers rejected him, but that was only at the beginning. These Kincaid brothers were not easily trusting. It was interesting that Jackson was Clay’s twin and pretty tragic with how Jackson had been taken away from his twin. Despite it all he turned out well adjusted, just like his brothers. Tara’s character was a young woman who had her tragedy early on in her life. She rose above her own tragedy and was able to make something of her life. I loved Tara’s spunk but she was still very insecure, Jackson will help with that insecurity.

The ending was very sappy but I loved it. The authors gave a conclusion to these brothers and their wives.

For a year Gretchen has been planning her wedding to Hunter. She wants the craziness to be finished so she could start her life with her husband but there will be a problem with Hunter and that situation could unravel their wedding.

Beauty and the Billionaire: The Wedding is the last book to the series Billionaire Boys Club by Jessica Clare. I really liked this novella. I thought it wrapped up the series nicely and it was entertaining to read about Gretchen and Hunter again. I felt at times that it was very short but with Gretchen mentioned in the other books from the Billionaires and Bridesmaid I felt her story was complete.

It was fun to read about Gretchen and Hunters wedding. I had liked them from the beginning. Gretchen is still very outspoken and Hunter is still very shy but he is in complete love with his soon to be wife. Jessica Clare stayed true to how her characters were and interacted with each other especially with the conflict that comes between the couple, though it didn’t really, as it was all blown out of portion in Gretchen’s mind.

What surprised me was the other story line with Daphne, Gretchen’s sister, who was the singer/druggie. She was getting clean and I liked that she was staying clean. I was still not a big fan of hers but I liked that she did have some redemption and was becoming the woman she used to be.

Well this is it for me with the series from Jessica Clare but I will be back to this author.

Kylie was a makeup artist and on her way to a great new job. The only problem happens when she meets a guy, Cade Archer. She will have a one night stand but will find that Cade will be following her. Kylie wants more but the problem was her new boss, Daphne, wants Cade as well.

Cade Archer had been in love with Daphne for years but he finally saw the light and knew she would never be that girl again. It will be then that Cade will meet another woman and will instantly want her. She was everything he had wanted but he just had to get her to believe him.

One Night with a Billionaire is Billionaire Boys Club sixth book by Jessica Clare. I really liked this book. I thought it was a good finish to the series especially the last scene of the book. It gave some humor and a place for these brothers and their significant others.

Alright now Cade’s character was always the good guy, the calm guy, and the dependable guy. I liked that he was all those things but it drove me nuts that he kept wanting Daphne. Though he wanted the Daphne that he knew years ago. I liked that he let himself let loose and tried to be happy. The other character is Kylie who has had her own troubled childhood where she had felt like a burden. She never wants to feel like that again which is why she is so independent. I liked that she tried to make sure that her relationship with Cade was secret to protect Daphne but it got annoying. I wanted her to be just happy with Cade and be accepted, not hide. But what was worse was how Daphne’s people just let her get away with anything. Daphne’s manager was the worst of them all.

Daphne, Daphne, Daphne. She was a character. I really disliked her to the point that is was really hoping that Cade wasn’t stupid to fall for her again. There were some times that you saw her as not a bad person but there were plenty more with times she was horrible. I will say this and I think Jessica Clare gave the right ending to Daphne’s story.

So that is it for the Billionaire Boys Club but I am looking for more books to read. One series I am going towards is Hitman.

Audrey Petty has loved Cade since she was young but he never saw her more than a sister. She hoped that spending time together would change that but she will have a distraction. The distraction is the playboy Reese whose goal was to annoy her. Audrey put up with his annoyance but when things started to get heated she will finally give into temptation.

The Wrong Billionaire’s Bed is the third book to the series Billionaire Boys Club by Jessica Clare. I thoroughly enjoyed this book.

Audrey was very professional and strict with herself which I didn’t really mind though you wanted to at times shake her, so that she would wake up. I actually thought it was good that she was so responsible because it was needed. What she needed to learn though was when to walk away from her troubled sister. I have to say that when she got flirty with Reese I was cheering for them. I liked Cade but he was too much like Audrey. There was no real spark, now with Reese it was like an explosion of fire between them. With Reese being the playboy of the group you knew that things would get heated. I liked Reese. He sometimes went a little too far but then you are surprised by his action that shows you he is a good guy.

So the character of Daphne was annoying and sad at the same time. She will be in the last one book. I don’t know how I feel about that. I am sure that she could change but will she or will she continue to be selfish. My guess is continuing to be self destructive but I will see when I read the six book. Personally I don’t want Cade to be with Daphne because he would give into Daphne way to easily.

Well in order to get to the six book I will have to get through the fourth and fifth book. I will be reading the fourth book next. 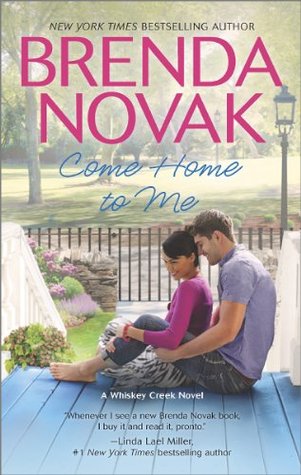 Presley Christensen was back to Whiskey Creek with her two year old son to make a life for herself. She was apphrensive about coming back but knew that Aaron would be moving away except it wasn’t fast enough as they will start to fall back into bed.

Aaron Amos wanted to apologize to Presley since he disappointed her two years ago but every time he tried he made it worst. What made it worse was he started to feel jealous when she looked to be going with a steady guy. Aaron wanted her and was finding that he might want more.

Come Home to Me is the sixth book to Whiskey Creek series by Brenda Novak. Once again the writing was well done and you fall into the story very fast with these characters you have come to know. I really did like this book but if I compare it all the others I would say this is the lower one on the list.

This book was Presley and Aaron’s second chance but you wouldn’t know it thanks to how Presley reacted to him. It is understanding as she turned to him in her time of need and brushed her off. There was never love there on Aaron’s part, just a good time. That of course will change as Aaron has changed, but that doesn’t get them together. It does get them in bed but it will take more than that for Presley to give Aaron a chance and for Aaron to realize that she is everything he wanted.

Their story was a love story of trial and errors but their story wasn’t the only one being told. Brenda Novak is back with Chey and Dylan. They want a baby badly and Chey wants to give her husband a baby at any cost, so she ask Aaron to be a sperm donor. What I thought was stupid was the whole idea as it was going behind Dylan’s back. It would have been probably okay if Dylan knew upfront because all of this will blow up in their faces later on in the series. It is also underhanded which I didn’t like and it seemed like something that Chey’s character wouldn’t do, at least to me. So for that reason I wasn’t too thrilled with that part in the book even though the writing was well done like all the books she writes. I will be reading the next book which happens to be all about Eve when that comes out later in October of this year so I wouldn’t have to wait long.