Becca Thorpe needed a change of pace from her life. She found a small town and was determined to make it work. She will find a routine but it will be interrupted when the man she lusted after wanted her back. It will get complicated when he becomes her boss and her past catches up to her.

Sam Brody was a boatbuilder and good at his job but needed help with the everyday business. He will fight Becca from helping since as her boss he would not be able to be with her the way he wanted.

It’s in His Kiss is the tenth book from Jill Shalvis. I thought this was another great book from the series Lucky Harbor which is a series I can always count on for a heartwarming story. I haven’t read anything from Shalvis since last July. With her I wait until I can read several of her books in a row since I find her writing enjoyable, which is what I am doing now. I have the 10th, 11th, 12th and 12.5 next to read.

So Becca is a gifted piano player but left due to panic attacks when she would play, though that is only one reason she had to get away from her old life. You felt for Becca because even before she shared her past you knew it was something horrible that happened to her. Now even though she had to endure a lot in her life she was a very optimistic person. Because of her cheerful disposition you like Becca right away and hope that she gets her happy ending with Sam who was in serious need of someone to love him. Sam had a hard life with his dad and still was having a hard one which made life hard to get close to someone. He does get close to Becca and it really isn’t a struggle for him but he does put up his own barriers that block his own happiness. Don’t worry Shalvis will make sure the couple find that happy ending even through the obstacles.

I am continuing the series with the eleventh book. 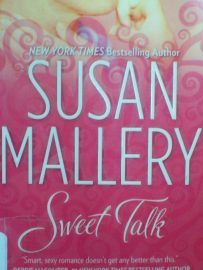 Claire Keyes a renowned pianist is coming back home to her estranged sisters and a home she had not seen in years. Claire wanted to make things right starting with helping her twin sister get through the surgery. She helped at the family bakery but it seemed everything she did she was told it was wrong. Claire was determined to become a family again with her sisters.

Wyatt knew not to trust Claire as he had listened over the years from Nicole about the estranged sister. He tried to keep his distance and dislike but she surprised him. Wyatt did not want a relationship but wanted to be with Claire who was willing to do the same.

Sweet Talk is the first book to the series Keyes Sisters from Susan Mallery. I was taken back from the book, first off I should say that I really liked this book. All the sisters were talked about, Claire, Nicole and Jesse but it was really Claire’s story. Now with that being said I have to say the main emotion was hate in this book, most of it coming from Nicole who has a lot of resentment to both of her sisters. There are plausible reasons but for hating Claire it seemed that Nicole’s hatred over the years only grew. It was interesting to read about all the sisters and what problems they had gotten into or what they had to deal with over the years. I am interested in what Jesse’s story is as I think there is more to it as no one is really listening to her.

So back to Claire I liked that she seemed real as she was pulled from her home at the age of six years old. I liked reading about how she grew a backbone when dealing with her sisters, her manager and even Wyatt. Now Wyatt was a great character but very jaded over what he thought would happen if he tried. There is a little surprise that comes about towards the end which results Wyatt to be pushing further away from Claire even more.

With the book there was a lot of hostility in the beginning with Nicole and Claire along with Claire and Wyatt. I liked the transition Mallery gives as that hatred does loosen up and becomes friendly.

The addition of Amy, Wyatt’s daughter, gave the adults a way to bond particularly Nicole and Claire who both had taken care of the girl.

These sisters have me hooked which is why I am happy to have picked up all three at the same time. The next book is with Nicole in Sweet Spot. I am curious if she will cool down her sarcasm and forgive her baby sister. Then again that might happen in Jesse’s story.

After reading two books from Cara Summers I found myself looking for more. So far the books I have seen from her are the Harlequin Romance series. I decided to continue on that route with Twice The Temptation. This is a collection of two short stories, Playing with Reese and Saving Brie, from the series Forbidden Fantasies.

Reese Brigtman is on the road to becoming a big success as a televised chef that is if her producer would ever make up his mind on the location. Mac Davis wants it all to work for his show and has now the perfect location. Now all he has to do is convince Reese to use her house. The only obstacle is singles weekend, an old flame and a couple of ghost.

Brie Sullivan is witness to a murder and now is down a bodyguard but soon Cody Marsh takes the position. Together they go into hiding at the haunted house of Haworth. Things don’t go as plan as there are several difficulties they will face, one being taken with desire and wanting nothing else. It doesn’t help that this is the singles weekend all about fulfilling fantasies.

I have to admit I liked the stories. They were complete stories but sometimes wished there were more details within the story. Each story was about 120 pages. They were quick, steamy and had a fun plot. I am interested in reading about the other two sisters who came before Reese. The ghosts were a fun element of the story which gave it a little of the paranormal romance.

Giving time to others was hard for Cassandra to do but when it was for charity she was willing. Thrust into the limelight Cassandra played many concerts at a young age but now Cassandra does not play concerts. She stays in her house only to do as she wants but now the Greek tycoon will change her life.

Neo Stamos had a goal to be a billionaire and he made it so with his friend. But now Neo has lost a bet and must take what his friend has offered. A years worth of piano lessons with a prodigy. Neo did not know what to expect with Cassandra but soon she would fill his world and complete what was missing.

The Shy Bride which is written by Lucy Monroe is a modern day short romance novel. Neo is the strong, cultured man with little love in his life. While Cass is the shy, innocent woman who has not had the chance to love. Together they make the connection and blossoms a relationship that starts from friendship.

I liked that Monroe creates the characters to become friends first as it was needed to let them take the final plunge into love.

Lucy Monroe will continue the Traditional Greek Husband series with the sequel and last book which will have Neo’s friend and business partner finding love.