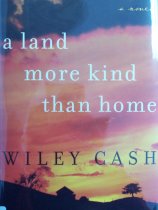 A Land More Kind Than Home by Wiley Cash was the next book from my book club. This book is Wiley Cash’s first novel.

Jess Hall was an adventuress young boy who  loved his older mute brother Christopher. Jess was ferociously protective of his brother especially as he spied his mom and his brother at the church. He didn’t like what he saw but before he could do anything it will be too late. Jess’s world will begin to unravel and turn upside down as secrets come out.

When I first started the novel I wasn’t sure if I would like it. The pace for me started a little slow. You were grabbed though with the question of what happened to Christopher “Stump” and once I got a few pages into the book I was hooked. You are given different perspectives throughout the book at the start of several chapters. This gave the book a well rounded plot and characters. There was definitely emotion that was invoked in me as I read this book which really was for Jess and Christopher. The rage went for the Pastor and the church which practiced their own kind of healing. You wanted the Pastor to suffer for what had happened to Christopher. I will say justice was given but at a cost.

Now what made this book club meeting a little different was we had the chance to speak with him on Skype. This was a fun experience as we were brought more insight to how the book had come to be written and where the inspiration was found.