Fallon Jones is used to mystery, to tight situations that needs his investigation abilities and his other abilities that give some worry on how powerful he is.

Isabella Valdez is in trouble. Men are following her and she needs an out. Her only hope is Scargill Cove. Following her intuition she goes there and quickly gets a job with Fallon Jones.

Together they will find the men who are chasing her and Fallon will have some of his past come back to haunt him. With Isabella’s help Fallon will find some closure.

A newest addition to the Arcane Society series is always a fun read. Jayne Ann Krentz delivers her characters over and over. I loved that this time Fallon was in the for front. I had been waiting for his time and it was not a disappointing story to read.

Isabella’s character was fun and adventurous just the opposite of Fallon.

The Arcane Society Series is one of the more unique ones I have read and Krentz keeps it interesting especially now that there are objects which are coming forward from the past and heading to the future in her other series.

So far Hamilton has shown us the beginning of Anita and how she is progressing but in the ninth book she goes back with Anita touching base with what she does best. 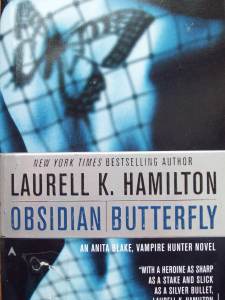 Anita is asked by Edward to come with him on a job that he is not very descriptive about.  Anita is hesitant but has to go.  When she gets there the job is not the only thing that is a surprise.

The plot surprised me.  I have read the book one time before but I didn’t remember liking it this much.  I guess I am appreciating the story that is being told more now.  Hamilton throws Anita into the action and there is a lot.  Violence is everywhere with scary villains and men who are supposed to be the heroes.

There is no sex in this book.  Anita is staying away from Jean Claude and Richard.  I find it amusing reading the book as she does this.  But the thing that I didn’t remember until now was she was feeling this pull of sexual desire.  This hightens as Anita is transformed more with power that is coming to her.

This book was fantastic to read because of Edward.  You were shown a side of Edward with Donna and the kids.  You didn’t know about, don’t know if it will work but I am cheering for a semi happy ending with this group.

The toughest part of the read which Hamilton does well is with the torture.  The kids are strong but now different.  They are not the same children.  You feel for them.

One point in the book one of the cops said that she was waiting for the right guy because then love would not seem so scary.  I liked how Hamilton referenced this idea because it reminds me when Micah comes into the picture.  He makes everything easy for Anita.  Is this what she was waiting for.  But he is not here yet.

You will enjoy the book with the intense action and how Anita is getting back into the field playing one of the boys but with her own twist.

The eighth book of the Anita Blake series was an intense book to read.  Hamilton brings Anita to a knew danger and level of power she doesn’t know how to handle.

In this book, Blue Moon, Anita is out in a new terriotry helping her once fiance Richard get out of jail for attempted rape.  She knows he didn’t do it but with going down there they are getting into a hole new heap of trouble.

I have to say that this book did not lack for any action, and that is action in the fighting sense.  Werewolves, men, witches, vampires, and Anita all were battling it out.  Hamilton is very descriptive in these parts and leaves you with knowing what is going on in the fight.

Another thing she is doing well is the relationships that Anita seems to be acquiring.  It is not to say that it is all sexual because it is not.  The relationships go between the pack and pard.  She is the leader in both of these which is unsual for a human but she is defying reality.  Which I like because it is interesting to see Anita’s powers grow.

Anita is gaining powers between Richard and Jean Claude.  She is able to heal with concentrating on sexual desire.  I find it funny that she cannot conjure that up for these wereanimals.  Later on in the books that is not a big problem.

Anita is changing as a human and she is a little less with every act.  But that does not stop Richard from finally beginning with her.  At first I was yay! they finally got there but after I thought he was still an ass for what he puts her through.  Not always my favorite character.

In Blue Moon it is the last one where there is not a lot of plot with the police which I miss but the plot does continue on.  With Richard’s problem you are pulled in and it keeps flowing even when you think that it is going a little slow.  Through the story you wanted to know what was going to happen, which I knew but it still had me entranced.

Blue Moon is a good story in Hamilton’s series but it is now going towards the darker side of desire and sex which Anita will start to be aligning herself with as the series continues.

After picking up the first book of the series after four years I knew that I wanted to continue to read the series.  Hamilton has a way of writing that intrigues me when it comes down to an actual plot line.  The first book did and so does the second, The Laughing Corpse.

The second book brings Anita Blake back into the scene with fending off the unwanted attention of Jean Claude who is now the master of the city.  He needs Anita’s obeidence.  Anita thinks differently.  But that is not the only thing on Anita’s plate.  A millionaire wants Anita to perform a raising of a zombie but it is over 2oo years old.  That kind needed human scarfise which Anita will not partake in.  Needless to say she gets tangled in a sticky situation with the millionaire and a voodoo priestess.

Oddly enough the book goes into great detail with Anita and how she raises zombies.  How she is willing to help others around her, well except Jean Claude.  I like so far that Hamilton does not bring in the aspect of sex right now.  The flirtation is fun and the forbidden desire that Anita feels for Jean Claude sets the tone of the book.  Of course we all know that changes as the series progresses.

As The Laughing Corpse continues with Anita taking the lead on the crime scenes and showing the men she is just like one of them.  Except behind closed doors I found it funny that Anita has a weakness which is for penguins.  That fact makes her still girly and not as tough as she appears to be.

As for the characters I like to see the contrast of Anita while she is out on the job.  She knows she has to be strong but that doesn’t stop her from admitting to herself she is scared.

Through the book Jean Claude is not centered on but he does play a role in Anita’s story.  He is on the side line waiting for his chance.  I like that he is powerful but still does not use all of that power on Anita to get her to go along with him.  They play a cat and mouse game which is entertaining to read.

When I read Laughing Corpse four years ago I wonder why I thought it was boring like the first book since now that I am finally reading them over I like how Hamilton puts the series as a cop thriller but with the paranormal.  It is real with the exception of vampires.

So far pretty happy with the series once again as Hamilton dives into the plot of Anita Blake with The Laughing Corpse.