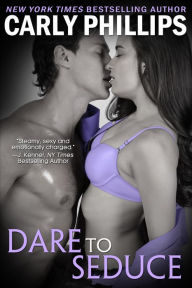 Max has wanted Lucy for years and he will finally make a move at her brothers wedding. Max knows that he will be able to seduce Lucy and he will do what he can to hold on to her, to show her that they belonged together.

Lucy has wanted Max for years but she closed her heart for him when he had married another. She will find herself then taking a chance when Max pushes for more.

Dare to Seduce is the third book to the series NY Dare to Love by Carly Phillips. I liked the book.

Lucy’s character was like her brothers in regards to being very guarded and damaged from their past. I felt that Lucy was even more so because of her age. Lucy drew away from people to protect herself from further hurt. I liked that she gave a chance to finding something with Max even though she wasn’t completely committed. Max’s character was another dominant man. I thought with how Max was acting this book would be going towards the darker side of BSMD but it didn’t. Well Max was probably rougher than all the men though I was okay with that as it was not in the whole book. I liked that Phillips focused on Max and Lucy who yes had that chemistry but they were also damaged due to their past.

Carly Phillips next book to the Dare to Love series is out but before I read that book I am moving on to a couple other authors, then coming back to the book.

Gabriel had wanted Isabella the moment he saw her but he did not take her because she was in a relationship. With her free Gabe will do what he can to entice Isabella to him.

Isabella had to get out of her relationship and she was able to but she soon found that she had no where to go. Isabella will be rescued by Gabe, the only man that had her feeling more. She wanted to take a chance with Gabe but she had to fix herself first.

Dare to Surrender is the first book to the NY Dare to Love series by Carly Phillips. I had finished the other series, well I finished all the books that were available to read, and decided I wanted more. So after reading several other books I am back with the author and I will have to say that this was really good. I think that this series will be more steamy than the other, although the others were very steamy. My thinking is because of the titles, Dare to Surrender, Dare to Submit, and Dare to Seduce. Well after reading this book I would say that the books will more than likely go into the route of dominant and submissive. I will be okay with that but I really don’t want to read about the characters really hurting each other because they feel pleasure in that.

Well like I said above this verges on the dom and sub but it wasn’t that bad. Gabe’s character liked control and it seemed that Isabella like to be submissive even if she didn’t really know it. What I liked about the book was Gabe did not force anything on Isabella. He made it all her decision, well he will be persuasive but ultimately it is her decision. Isabella’s character had lost herself in her previous relationship. I liked that she finds herself again which made her more confident. She gets her job back and little by little she is the person she had been before.

I am reading the second book next.