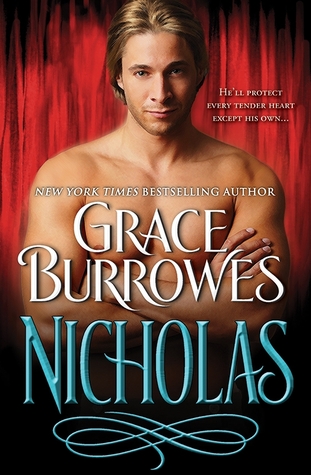 Nicholas Haddonfield does not want a wife but due to his ailing father he has promised to find one. Nicholas will come to the rescue of Leah Lindsey and make her his wife. He will be direct when telling her that he will never love her and never want children with her. He knows this will break his wives heart but it is the only thing he could do.

Leah Lindsey needed to escape from her fathers clutches. She will find a savior in Nicholas as he will marry her knowing all about her father. She will come to love her husband but the problem will come when it will not be returned. Her home will become her prison until she can show her husband to love.

Nicholas is the second book to the series Lonely Lords by Grace Burrowes. As I wasn’t too impressed with the first book I wasn’t sure how I was going to like this book. Remember Burrowes writing is very well done it was what was going on with the characters that I wasn’t loving. So in the second book I was more compelled to read this book. For me I liked this one over the first book.

Leah is a woman in a bad situation and its not getting any better. She has traded one prison for another it seemed. I liked that she fought for her husband and how Burrowes wrote how Leah felt it nearly broke your heart. In the end I wasn’t sure Nicholas deserved a second chance with his wife but as I wanted that happy ending I was willing to forgive Nicholas stubbornness. Now Nicholas was a stubborn man for not telling Leah what he feared or what was going on in his life.  You wanted to shake him for being an idiot and not explaining everything as he was ruining a good thing. I do get his fear and it would be terrifying especially if you didn’t know all the facts.

The villain is obviously Leah’s father who was a vile man who needed to be shot. That doesn’t happen but there is some justice at the end.