Daniel was on a mission to find Regan. He will be shocked to find her a fighter and will become fascinated with the woman. He will do anything to protect Regan and at the same time find the men who took his sister.

Regan was living in a hellhole for the last two months and knew that no one was coming to get her. But Regan would not give up and let the bastards win. Though Regan will be rescued by a man who had been sent by Daisy, and she will fight to get back home.

Last Breath is the second book to the series Hitman by Jessica Clare and Jen Frederick. I liked the book. I think that since I just read the first one I knew what to expect and it flowed really well, even with all the horrible things that happened.

Well there was certainly a lot of bad things that happened in the book. The major was with what happened to Regan’s character. I really liked her character but I felt it was a little unbelievable that she would be raped repeatedly and then want to be with Daniel later on in the book. And that was only just a few days after meeting him. Although I did like her with Daniel because it gave her someone to be happy with again. What I liked was that Regan’s character wasn’t broken. She was on the verge of being broken but it had not happened. So then there is Daniel’s character. He was strong and skilled in warfare. I liked that he was easy going but he was very lethal at the same time. His story was interesting as he was looking for his sister who had also been taken.

So I was really happy that the authors gave a conclusion with Mike, Regan’s boyfriend before she was taken. I liked it because it gave closure to Regan.

I am continuing with the series and will be reading Last Kiss next. This one is with Naomi who was Daniel’s sister. 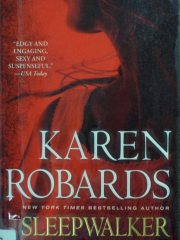 Micayla “Mick” Lange was a good cop but found herself in a situation that has her guessing what was really right. She will catch thieves red handed with a brief case of money. She will stop the thief, Jason Davis but soon find that all is not what it appears to be and finds herself getting more tangled up in lies and betrayal making her wonder who to trust.

Sleepwalker is a novel from Karen Robards. I have discovered this author not too long ago with the book Shiver and I absolutely loved that book which made me cautious to read another book of hers. I was cautious because if this book wasn’t as good then I didn’t want to continue on with the author. Well after finishing the book I knew that I would be going back to Karen Robards. The book was suspenseful and full of thrilling scenes that had your heart bumping at the action of the book.

Sleepwalker was a longer book with 400 pages over but you didn’t feel that it was a long book to read. Every page I devoured and wanted to know what would be happening next. The main characters were complete opposites but more alike as you find out about Jason’s past which was unraveled very nicely for both Jason and Mick. The twist at the end with the mystery man was something I didn’t see coming.

The bad guy was obviously Nicco but he was really behind the scenes and it were the bad guys on his payroll were the ones who were in the mist of the action.

I am a definite fan of Karen Robards especially with how she writes a thrilling and suspenseful scene with memorable characters.