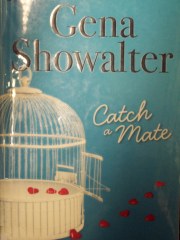 “Jillian Green is always getting caught in the act-its her job!  Working at Catch A Mate, Jillian gets paid by suspicious wives to smile, flirt and prove that no man can be trusted around the opposite sex.  Her only ground rule?  She never gets physical.  Until a heart-stoppingly gorgeous males walks in…

Marcus Brody has just been hired as bait to test females fidelity.  But the last thing Jillian needs is a partner…especially an infuriating, irresistible man who’s got her fantasizing about tearing off his clothes.”

The plot was something new and intriguingly written by Gena Showalter.  I was interested from the first page.  I loved how the agency found out if their boyfriend or husband was cheating but it got even more dicey as the new owner of the agency stepped forward and brought in male clientele.  The ladies were not happy especially Jillian.  Her anger took a toll on Marcus but not in firing instead kissing her passionately.  Their scenes together were heated and passionate.  Jillian became saucy and angered while Marcus became arrogant and stubborn as the kept the war between them going, but that didn’t mean they were going constantly out to hurt themselves just the opposite.

The main characters Jillian and Marcus were edgy with their attraction and made for entertaining reading.  Both characters were perfect for each other they just didn’t know it.  I felt for Jillian and her family problems especially with her mother.  That situation would be hard on anyone.

“Catch A Mate” by Gena Showalter is the first book that I have read of hers and all I have to say is wow!  This book was interesting, witty and provocative.  I was pulled in right away with the dialogue and plot.  The characters were well rounded, they had depth and I was intrigued to learn more about them.  This was a book worth reading.