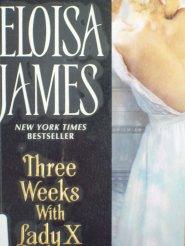 Thorn Dautry needed his house to be rearranged for his future potential bride would be coming with her mother. He wanted to make sure her visit went well since he was the bastard son of a duke and not exactly accepted into society with the exception that he was very wealthy. Thorn will find that it will be difficult to concentrate on his future bride when he was focused in on Lady Xenobia.

Lady Xenobia India was good at creating order from chaos when designing houses. She will be set to a task to help Thorn Dautry. She will take the job but as they work together here and there temptation starts to set in. India does not want to become one of those woman but as he is not officially engaged she will take the chance with this man and feel for once a passion.

Three Weeks with Lady X is the seventh book in Desperate Duchesses series by Eloisa James. This is the first book I have tried in this particular series and I can certainly see myself going back for more.

I really liked this book. I thought it was a story worth reading. I will admit Eloisa James is not my go to author but I thoroughly enjoyed this story. I liked India’s character as she had morals and did her job. Of course she was a woman and a passionate one especially when it came to Thorn. I liked that was torn when it came to pursing something with Thorn but kept in mind of the girl who would be with him. Now Thorn was a man full of passion but he was reserved thanks to his past. I liked that once again he was thinking about his intended but it would have helped if he kept his hands off India to remain faithful. Although I didn’t want Thorn and Lala to be together so I was happy to have India stir up the situation which will have Thorn rethinking about marriage.

The romance had bumps and downs but eventually a happy ending was coming their way. I was happy to read that the character Lala had her own happy ending with the man I knew she would fall for. Vander was the only one who didn’t get what he wanted but I wonder if he will be in the next book of the series, if another will be written. 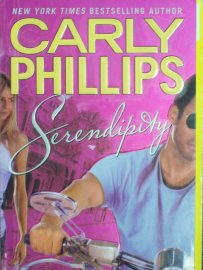 Faith Harrington knew coming back to her hometown would be hard but she had to start over. People were not overly friendly to her thanks to what her father had done but she was determined to make it work. She had not expected to encounter Ethan the bad boy that made her feel things still after ten years.

This was a good intro to the series and about the brothers. You feel for Nash and Dare who were all but abandoned by Ethan when their parents were killed. Then again you feel for the eighteen year old Ethan who was carrying too much guilt and was considered a screw up. Faith had her own demons she had to face but she was able to get out of her situation alive mentally and have the determination to start over. Ethan and Faith were similar in the idea that they both needed a way to start over.

I really liked the addition of Tess. She was a handful for the brothers. I liked how Phillips made her exactly how a teenager with all that she went through would act. She also did a good job with the brothers and how they feel with their older brother, and how the town condemns Faith for what her father had done.

I am reading the second book next with Nash and Kelly. I am intrigued how their relationship will start as I have read the third book and already know the outcome of their story. 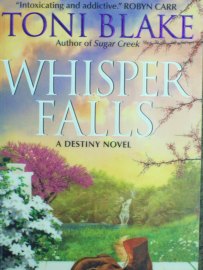 Tessa Sheridan is back home to Destiny as her interior designs did not work out. She will find an unlikely client who is the bad boy biker that just moved next door to her. Tessa feels the attraction but with her disease she doesn’t want anyone to see her when she is down.

Lucky Romo is back in his home town which he hasn’t set foot in for almost half his life. He is making a change as he got unexpected news about a son he fathered. Going back home was hard with all that had happened.

Whisper Falls is the third book to Destiny series by Toni Blake. I have skipped the second book because that book is not at my library but I have noticed that these books really can be read on their own. I do miss out on the introduction of Mike Romo and his story but he is certainly included in this book. I am interested in the disappearance of Anna Romo. She will be making an appearance in the sixth book I found out as I sneaked and read the summary. From what I have heard about her I am interested in her story with how she disappeared and what happened.

I liked this novel just as much as the first. It was a good story and hits the emotional target with both characters. You feel for Tessa and her disease, and how she was coping with it. I was happy that she found a champion in Lucky. Their romance was unlikely but it worked. Now Lucky was one that had drawn me in. You felt bad for him because once his sister was gone he did get pushed to the side. I understand why that would be something to push a kid into rebellion but Lucky goes further. He will join a biker gang and do things he wouldn’t be proud of during that time. I liked that he made it out and with his friend Duke.

The brothers relationship was strained as they were both stubborn, I think Mike was more stubborn that Lucky, but they were able to make it work. Of course it took most of the novel for that to happen and only when Mike figured out some facts about what happened after Anna disappeared. Now there is a villain in the book that is going after Lucky and its an unlikely one but it is logical once you know why they are doing this.

Holly Lane is the next book with Sue Ann which I am surprised at since it looked liked she had a perfect life with her husband. I guess I will find out very quickly as it is the next book I am reading.