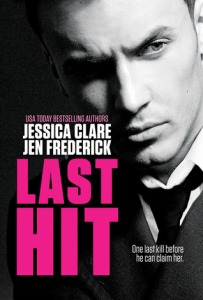 Nikolai was a trained assassin since he was a young boy. He has killed many. When Nikolai meets Daisy he will want her instantly but he has to be careful as he has enemies who will be after him, and Daisy.

Daisy needed freedom from the life she had lived and she takes that chance. She will move out and be on her own for the first time. It is then that she meets Nikolai and everything in her life will change.

Last Hit is the first book to the series Hitman by Jessica Clare and Jen Frederick. First off I did like the book but it took some time to truly get into it. Don’t get me wrong, there was intrigue and I wanted to know what the heck was going on, but it took some time for me to really like the novel. A part of the reason I think was it was just so different from her other series. Though once I was into the story I was in it for the whole book.

Daisy’s character was a sweet, naive girl who was in way over her head. I liked her character for the most part but she was a little too trusting, and that was too unbelievable. Though I did like that she gave Nikolai a chance because you knew that she would find what she needed with him. Now Nikolai is a dangerous man. He has been a trained assassin for many years. He will be watching Daisy, which I will say is a little creepy. Although that is is job. I found myself liking Nikolai. He was a man stuck in a job that he was trained to do, not something he loved. I liked that he was starting to change thanks to Daisy.

I am going to be continuing the series and will be reading Last Breath next.