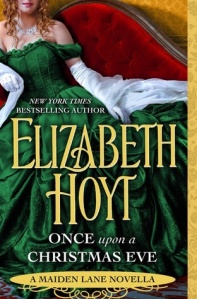 Adam Rutledge, Viscount d’Arque was in his carriage with his grandmother when their wheel was broken. Adam will be fortuntate that they were close to another house. He found out it was St. Johns which was less than perfect as Sarah St. John was in the house. She had a very low opinion of him.

Sarah St. John hated rakes which was what Adam was, though as the days go by with them at being together Sarah started to feel something for him. She started to see that he was not just a rake.

Once Upon a Christmas Eve is the second book to the Maiden Lane Novella series by Elizabeth Hoyt. I liked this novella. I thought it was a sweet addition and perfect for the Christmas season.

Sarah’s character had a very poor view of men especially rakes because of her past. She will be shown that some rakes were not so bad. That they had layers underneath their mischievous ways. Adam’s character was more than he appeared. He had a tragic story with his parents which helped explain his desire never to settle down. I liked Adam for the most part. I thought at times he was a little too pushy with the teasing but in the end he redeems himself. 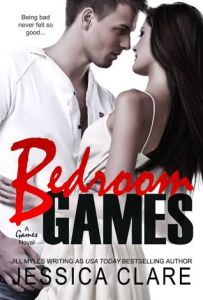 Kandis Thornton was on the show for one reason, the money. She wanted to help her mother and the money would do that. Kandis had a plan going into the show but it will be blown away when she gets a partner, Brodie Short. Though as they work together Kandis wonders if something real could come from a fake show.

Brodie Short was wanting to be famous, that was why he was on these reality tv shows. His first show had him as a villain and he wanted to change that. He had become a flirt instead but his partner will have him wanting more.

Bedroom Games is the fourth book from the series Games by Jessica Clare. I really liked this novel. I am a big fan of Big Brother reality tv show and this was based off that popular tv show. Reading this novel definitely brought me back to the show especially with all the deals that are made between the contestants.

Kandis’s character was someone I appreciated because she was playing the game but even through all of it you could still tell the real girl beneath it all. I liked that she found lust with Brodie but she still kept her guard up around him. Brodie’s character was considered the villain from the previous book and I fully expected to dislike him but I didn’t. Within this game it is expected to sneaky and he did a good job, but you got to read his thoughts in the interviews and knew that he was starting to feel something that was real. Though all through the whole book I wondered if those feelings would truly last. I got the answer at the end of the book.

I am reading Body Games next. 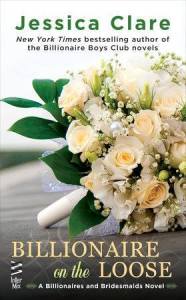 Taylor was a nerd and very much into computer games and anything with science fiction. She was not the girl to attract the attention of a hot guy like Loch, but she was loving the time she was able to spend with him.

Loch was being sent away from his home for a couple years and within a week he was bored. Though when he was with Taylor life was not too boring. He wanted to spend time with Taylor but he will complicate the relationship when he sets up a plan to get back home.

Billionaire on the Loose is the fifth book to the series Billionaires and Bridesmaids by Jessica Clare. I really loved this story and it was all because of Taylor and how her character was in science fiction. My mom is a Trekkie so I grew up with all things science fiction and have been to a convention, which I have to say was entertaining. I loved the references with Dr. Who. I think Jessica Clare did a great job with Taylor’s character.

With Taylor’s character you knew she was genuine. She tried hard and was goofy, and very kind. I liked that she put herself out there no matter what, but hated that she was loosing her self from the guilt that was being put on her. When she met with Loch I was cheering for her but knew that a problem would be coming between them. With Loch’s character I actually did like him but he was a little immature at times. It was all because of how he was raised but he does change and changes for the better. What threw me was when he decided to just use Taylor. His character wasn’t mean or cruel, I guess he was just thoughtless, but again he changes.

Well that finishes up the series and now I will be reading the last book to her Billionaire Boys Club, Beauty and the Billionaire: The Wedding. 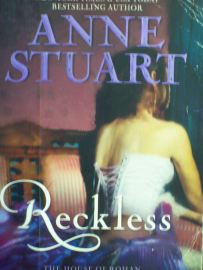 Viscount Adrian Alister Rohan wanted pleasure and was going to have it with any who was willing but his attention soon will be fixed on an innocent. Adrian will think that by taking Charlotte for the night that drive to be with her will be gone but one night becomes two and he can’t stop thinking about her. Adrian will try anyways and find that it will be hard to do as she tries to provoke him at every turn.

Charlotte Spenser had been in love with Adrian for some time but knows that it would never come to be. Then she gets her chance to be with him as he seduces her into his bed. Charlotte may have been an innocent and in someways still, but she will turn out to be the seducer to Adrian and the tables will be turned.

Reckless is the second book to the series House of Rohan by Anne Stuart and one I couldn’t put down. I had read the first book of this series a couple years back so I wanted to refresh myself with Stuarts style of writing and the story. Now the first story was about the Viscount Rohan and Elinor back in 1768. The second book takes place in 1804 and will be with the next generation of the Rohan family. I was excited to see where this story would take us. The story was similar to the first as Stuart keeps that debauchery very clear in the book and the games that are played with the Heavenly Host. With all the harsh acts and words that are displayed in the book there are good people behind the facade which is why I loved reading this book.

I rather liked Charlotte and her continual fight that she had even though she was clearly in love with this man. Now she was never truly forced to be with Adrian but he does push the boundaries with her. Charlotte does not break even though there will be tears of her heartbreaking. Adrian is almost like a villain with his cruel words and vast appetite for pleasure from anyone who would give it. I liked that this man was being taken down by a woman who was an innocent and two years older than him. Their passion will be explosive with anger and lust every time they find a moment to be together.

Now once again the story is split with Charlotte and Adrian along with Simon and Lina. Simon and Lina had their own quarrels that had to be dealt with. There was a surprise with the good vicar, Simon Piagett, that was humorous and will give Lina her own happy ending like her cousin Charlotte.

The villain was Eitenne, Adrian’s father’s cousin who was from the first book, which I didn’t really expect in a way at least how he was in the first book. Through the dialogue it is clear that he has hatred for his family. He will stop at nothing to get what he wants but as with most villains he wouldn’t get what he wants in the end.

I am starting the third book next which will be with Miranda Rohan and I will have to see if she follows the same path of her father and brother.

An incredibly love story that left me smiling.

Desdemona Wainwright thinks Sam Stark looks much too calm for a man who has just been left at the alter.  The males in her theatrical family would be letting their feelings explode.  But she was hired to cater his wedding, not to save it.  Desdemona marches into Stark’s den to demand the much-needed payment for the canceled reception-not to fall in love.  But the self-controlled, steel-willed man behind Stark Security Systems, a multi-million-dollar consulting firm, does have the cold, logical brain of a computer-along with the muscular, sensual body of a medieval knight.  He is Desdemona’s exact opposite.  And don’t opposites attract?

Sam Stark cannot understand what is wrong with treating marriage as a business deal.  He ex-fiancee, stately blond Pamela, and seemed so perfect so reasonable.  This hoyden with wild red hair and huge turquoise eyes, insisting he write a check for hundreds of uneaten miniature asparagus tarts, is a different type: temoermental, volatile, and likely to drive a man crazy with her moods-or with desire.  But Desdemona has the professional catering skills he needs for his business.  It never occurs to him that she might not accept his offer to be his no-strings-attached, stand-in wife.

Desdemona has other plans for herself and Stark.  She thinks involving him with her staff, made up of her relatives and other out-of-work actors, will give him a sense of family.  He thinks he’d rather spend his time with computers, but all too soon his private life and his business affairs are under siege.  Desdemona is breaking down the walls around his heart-and someone is trying to get into his files to steal a top-secret computer program.  Stark’s suspicions soon center on the people Desdemona holds most dear, as intrigue and murder swirl them all.

I loved this book.  It was cute, humorous and enjoyable to read.

I loved how Krentz has a simple beginning but escaltes into a dangerous situation as the pieces begin to drop.

The family dynamics are very real and loving.  Each character is recognized by their abilities and flaws.  And as a plot goes this one was fascinating to read about.

Trust Me is a book you will want to pick up.