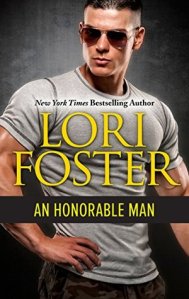 Lieutenant Colonel Hamilton Wulf was on leave to see Liv to give her bad news but he was also there to bring her something more. It will take everything that Ham has to convince Liv to take a chance on them.

Liv Avery wanted a life outside of the military, but it was difficult with her father and the man she loved were in the air force. When bad news comes her way Liv will have to put trust in the man she loved and take a chance.

An Honorable Man is part of a collection called Men of Courage. I decided after reading Outrageous I wanted to find another book from Lori Foster that I have not read. I didn’t have any doubt that I wouldn’t like the book as I do like most of her novels. Well I really liked this book. It was short but had that emotional pull that you wanted.

I liked that Liv was doing what she wanted and trying to move on. She was tired of playing second to the career of the man that she wanted. Your heart hurts for Liv as it was clear she had been hurt by the men in her life, emotional hurt. I liked that Foster wrote Ham to be aware of the struggles Liv was having. I instantly liked Ham because he was different from her father. He wanted a wife, kids and the military and he was determined to make it work.

I think that the story could have been flushed out more but I felt satisfied with how it was written. 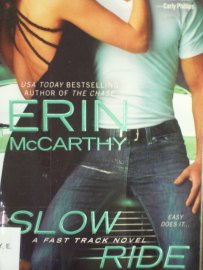 Tuesday Jones has just lost her father and is trying to get through her grief. She will soon find herself being comforted by an ex race car driver and it will turn into much more.

Daniel “Diesel” Lange has had plenty loss and tragedy in his own life. He wanted to help Tuesday but also wanted her romantically and was filled with lust for this woman.

I was waiting for the fourth book but it was already checked out so I went on to the fifth book, Slow Ride. Erin McCarthy writes a steamy plot so far in all these books in the series Fast Track. So Tuesday is a blogger that can be a little harsh when writing her stories. She calls it like she sees it, but is a good person with a few little problems. Diesel is a wonderful character. He is the strong manly type but cares and can relate to what is happening with Tuesday but he is still closed off to his past. I think both characters are dynamic and actually are very much a like being flawed. Tuesday has a becoming alcoholic problem and Diesel is too afraid to move on.

Now what Erin McCarthy does in this book is getting the characters into some really steamy scenes and there is a lot of sex between these two characters, and I mean a lot. The sex is what gets them together but its overcoming their own personal tragedies that keeps them together. That is if they can get it right. The sixth book I am reading next is Jacked Up.