Kyle Houseman was constantly on guard from his ex wife who would not leave him alone. His solution was to just give her money to make her stop harassing him. That will soon stop when he meets a woman who shows him that it was possible to move on from the only woman he had loved.

Lourdes Bennett had come to Whiskey Creek for one reason which was to write her songs for her next album. The problem was that Lourdes was heartbroken and writing was not coming easy for her, then she meets Kyle and things will change.

A Winter Wedding is the ninth book in the series Whiskey Creek by Brenda Novak. I really liked this book. I liked that it was about two characters who had their heart broken and both needed to be mended. This was not a book where the characters jumped right into bed which I appreciated because you got to know them first, and the fact that they had become friends was very sweet. They helped balance things out in each others lives.

Lourdes character was one that I easily liked. She was a small town girl trying to make a career for herself and she was not a diva. She was a down to earth character and at this point she was pretty vulnerable but she had a strength inside. That strength was helped by Kyle. So Kyle’s character was I thought of a push over. Now don’t get me wrong he was a strong guy but when it came to his ex he just gave in. Before I read this book I had read When We Touch which was when Kyle cheated on Olivia with her sister, who had become his wife. Kyle was always doing the right thing. I liked that finally in this book he was getting more of a backbone when it came to his ex wife. He was living again especially with Lourdes in the picture. There was one part in the book that had me cheering because Kyle finally gets some justice with all that had happened to him because of his ex wife.

Noelle, Kyle’s ex wife, was a piece of work. Basically from the entire series she had been nothing but trouble. In this book it was like she went crazy. She will do a lot of harm to those around her and personally I was happy with her ending. There was one thing that bugged me with how Olivia forgave Noelle especially since she had stolen Kyle, but I guess that was how Olivia operated and it had been five years.

I have one more book left to read in my pile for Brenda Novak which will be the tenth book, Discovering You, and I am reading that one next. 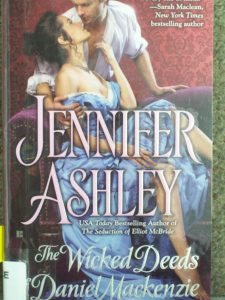 Daniel Mackenzie has grown up in a wealthy, scandalized family but was never unloved by any of them. He grew up generous and smart with an eye for beautiful women which led him to Violet. He knew she was not gifted with a sight to see beyond but that did not make him stop wanting her. She will drift away but Daniel will find himself following her only to find there is much more to this woman.

Violet Bastien is a professional at what she does. Being a medium is the way she and her mother makes a living. Her job was easy and that was to entertain, to read people which she got good at but it came with a price. She learned long ago not to trust thanks to a man who ruined her. Violet will learn all men are not the same thanks to Daniel but it will not be an easy journey.

The Wicked Deeds of Daniel MacKenzie is the sixth book to Highland Pleasures series that is written by Jennifer Ashley. I had become obsessed with this series thanks to the very first book with Ian. Through the series you heard about Daniel and I have been waiting for his own book which is now here. First off I loved this book. The story was everything I wanted and more. You had Daniel as the lead but there was also the MacKenzie men and their wives that made an appearance through the book which kept me remembering why I love this series so much.

Then there was Violet the fake medium and she was one who suited well with the clan even though she did not think it would go down that path. Violet had her innocence ripped from her at sixteen years old and it has traumatized her. She was not someone who cried in the corner but she was also not able to open herself up to anyone that is until Daniel. Now Daniel was someone you wanted to have interest in you and to take that chance. He was generous and an odd mixture of his Uncles and his father but it made him to be a good man. I liked there was the sensual side, a dangerous side and a caring side. Daniel has many layers and all are shown throughout the book.

I love how Jennifer Ashley writes Violet and Daniel’s relationship from start to finish. There was no broken feelings between the two but there was Violet’s past that had to be gotten over and Daniel’s family. The family wasn’t much of a obstacle but Hart would not stay silent like always.

The ending gave a justice to all that Violet had gone through which was satisfying. I will keep on the look out for the next book which is sadly comes out next year at some point. There are some novellas that are part of the series which I am on the look out but can’t seem to find. I have been thinking of trying out another series from Jennifer Ashley like Shifters Unbound which sounds like it goes towards the supernatural.