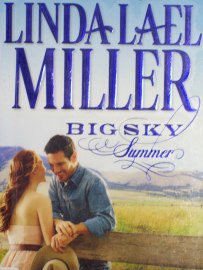 Walker Parrish has lived for years on the sideline when it came to his kids. They only knew him as a friend but that will soon be changing when Casey moves to his town. He will finally start to have a relationship with his own kids and the woman he has loved.

Casey Elder wants a normal life for her children. She loves music and performing but wonders if she has made a mistake with how she raised them and that she kept them away from their father, Walker.

Big Sky Summer is the fourth book from Parable, Montana series by Linda Lael Miller. I had been wondering how the story of Casey and Walker would play out. It was an uphill battle between them and the kids as they got over the shock of finding out who their father was and where to go from there.

I liked the story for the characters as they had flaws like Casey who I wasn’t warming up to all the time. I think it was because of the situation she put her kids into along with Walker, but she does redeem herself. She is a good mother who was scared and on the verge of a big career. I liked Casey and Walker’s explosive passion that happened every time they were together alone. Now Walker was a cowboy through and through. He played the part of friend to the kids and it kind of broke your heart that he was only on the sideline. With the turmoil that happened there is still a happy ending that brings the family together.

The last book I have from Linda Lael Miller is Big Sky Wedding.