Lizette Henry wakes up one day and realizes that the woman looking back at her is unrecognizable. She will find that flashes of memory were coming back to her. She will also realize that she is being watched.

Shadow Woman is a novel by Linda Howard. Alright now overall I liked the book. I thought the beginning pulled me into the story with the shooting that had happened. Then with Lizette and how she did not know who she was. I was intrigued but at points I lost somewhat interest in the story. I think what threw me off the plot a little was this brainwashing. It was a little strange. Also I was frustrated as I wasn’t getting answer right away. Though Howard will give you answers of course and I will say that towards the end I was back into the story. I was getting a better insight with what was happening.

With this book it was hard to tell which person was the villain. I had a good idea who the bad guy was but there were other options. The qualifications of a hero was blurred which made that person almost villain like.

I do think that Linda Howard can write a well written suspense romance novel and I am looking forward to reading from from her.

Sophie Dunston knows all too well how dreams can kill.  As one of the nations’ top sleep therapists, she specializes in the life-threatening night terrors that her ten-year-old son, Michael, suffers from.  But she is also an expert in another kind of terror-the kind that can turn on a dream life into a living nightmare in the the blink of an eye.

Someone is watching.  He’s a shadowy figure from out of her darkest fears and he hasn’t gotten her.  In one shocking moment of violence, he’d shattered Sophie’s world forever and left her with only one thing to life for: her son.  But the nightmare isn’t over for Sophie Dunston.  It’s just begun.  He’s been waiting.  Sophie was supposed to die the first time he’ll make sure that not even a miracle will save her.

It wasn’t a miracle that saved Jock Gavin, but it was pretty close.  A semiretired hit man, commando, and jack-of-all-deadly-trades, he knows what Sophie is up against-and that she’ll need help.  But the man he’s chosen for the job is an unpredictable as he is dangerous.  Matt Royd is a wild card-hard, cool, merciless-and putting him into play changes the game completely.  But to whose advantage?

Sophie will soon find out.  She will have to trust Royd because she has no choice left.  Because the bogeyman haunting her dreams is all too real and he’s on the hunt again.  Because the nightmare he’s got planned for Sophie won’t end when she wakes up screaming.  I won’t end. Ever. 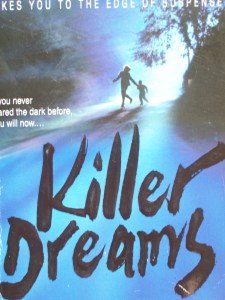 Reading Iris Johansen I have come to love her style of suspense and action mixed with passion which is built up until it is ready to burst.

Killer Dreams was intense to read.  I love the scientific aspect with the formula to help night terrors.  I thought that was interesting.

It was fantastic to read about Jock and Jane.  They are two of my favorite characters in Johansen’s books.  They are repeated and it is fun to read from when they are younger and to see how they are developed through the books.  Jock’s role is intriguing in the books.  He plays the mercernary with a heart but still very confused.  Because of this his character is enduring.

Royd and Sophie’s dynamics were perfect together.  They hated each other but there was so much passion there on the surface.  It was fun reading to see how long that tension would last.

A lot of action and sabotage.  And the beginning of the book gave you a preview of just how intense the book would become.