Howard Barr has some trouble ahead from the newly matchmaking vampire, Shanna when she learns who his celebrity crush is, but there is more. Howard will find out the man he thought was dead is very much alive. He will find a new way to seek his revenge on the man that destroyed his life.

Elsa Bjornberg and her crew travel the world fixing up houses for their tv show. She loves her work but at times hates her nickname. She wants to be cherished and not just be with one of the guys. She will soon meet a man that makes her feel small in Howard but there will be more to this man.

Kerrelyn Sparks newest book, Wild About You, in number thirteen to the Love at Stake series. With every book you are brought back into this world of vampires and were-animals. These books can be read on their own but its best to start at the beginning as you will get to know the character much better, like Howard. He was there since the beginning and over time in the books he was more or less overlooked until the twelfth book. In Wild About You Sparks brings in something new with guardians and magic which have not been really talked about. I thought it was a great add and gave something more for Howard and Elsa. Now Elsa was an fantastic character. I loved her description by Sparks. She is the ultimate amazon woman but with unknown power. Sparks does a good job at explaining about the guardians and the legend. There is also a twist involved which ties the whole story and legend together. Now lets not forget about the bad guys which is really Rhett and his minions. After the last book I had a feeling he wasn’t done. Sparks explains the feud for Howard and Rhett well never explaining the whole thing at once, she breaks it down slowly.

Wild About You was another well done, fun, quirky and passion filled novel from Kerrelyn Sparks leaving me to wonder who is going to be next in the series?

Have to say it took me a little to get into the book, The Wolf Who Love Me. This is the fifth book of the series and I remember liking the first four. Now I did like this book its just that it took a little longer to get into. I think the main reason was I was trying to remember if I had heard about the Hadley brothers but once you push it aside you will then start to enjoy the story. 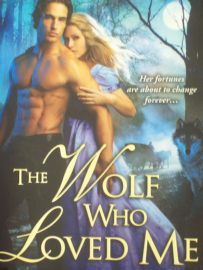 Lady Madeline is to be married to a man who is as privileged as herself. Her father would make sure of it but why then is she now looking towards penniless Weston Hadley. She will find herself in a bind as they will be paired together.

Weston Hadley has been in love with Lady Madeline since he first saw her but he could never have her. It is not just for being penniless either as Weston changes to a wolf. He will find though himself with a problem. Madeline will find out his secret and his only solution is to marry her to keep her quiet, but things will not settle as Weston would hope.

The characters were entertaining but I have to admit Madeline bugged me a little. Her character was flawed in a way that made her too whinny at times. She annoyed me at times but that was how Dare created her to be. If you remember she is from a privileged background then it makes sense and more intriguing as she breaks from that hold.

I loved Weston’s character in the book. He was fierce and not afraid to share his feelings or to make an action that was needed.

I think it is interesting that Lydia Dare is extending this series to go beyond the original family to the extended one of the wolves. I will be interested in reading the ones after the Hadley’s and who will be next.

Waiting for books from authors is sometimes hard to do. I had taken a break from Kerrelyn Sparks as I had finished all her books from the series after The Vampire and the Virgin. Now she has a few more out and I was excited to read all about Carlos in Eat Prey Love.

Carlos Panterra is a were-panther who is looking for his mate. His goal is to find one to help with the children he has acquired. A problem occurs when Carlos finds the woman he wants, she is perfect for him expect she doesn’t grow claws. Carlos will fight that attraction for the perfect mate but it will be hard as he can’t get her out of his mind and she is not taking any hints.

Caitlyn Whelan is human but unique. Animals come to her willing and any language she can pick up but what scares her most is seeing a sister who she thought forgot all about her. Caitlyn was ready to hold resentment for Shanna but soon finds out why they were separated. Anger for her dad comes quickly but soon her mind is taken over by a man she wants to get to know, Carlos. According to everyone he is forbidden but Caitlyn likes to live on the wild side.

Eat Prey Love is the ninth book of the series Love at Stake. I have to say this series is one you can just keep reading. I like how Sparks keeps adding in new characters either as guards, vampires or were-animals who will play a future role in the series.

Before reading the ninth book I went back and read the first eight books once again to get back into the series. When Carlos is introduced you love his spirit and I was excited now that he had his own book. Carlos’s character is sensual with a witty sense of humor. The banter between Caitlyn and Carlos was like an old married couple.

Caitlyn was a good addition to the book. I am interested if their brother will make an appearance in the series later on. Caitlyn was unique with her own powers which were fitting when it came to her being with Carlos.

The adventure in the book kept going from beginning to the end. I found it fun to read about the previous vampires and their love interest being happy and the children of Shanna’s and Roman’s were a nice addition to hear about.

I can’t wait to pick up Vampire Mine. Finally Connor will have his chance!