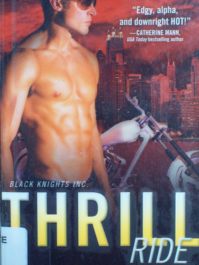 Rock Babineaux has been a member of the Black Knights team but now he is on the run and has gone rogue. Anyone around him would not believe he has betrayed his country. He will not be surprised when he will be in a manhunt by the CIA and his team, but running was necessary as it will be the only way to protect them.

Vanessa Cordero could not believe that her partner had gone rogue and she wanted to prove that he was innocent. Her team was on her side but in order to protect Rock they had to first find him. Vanessa will be determined to find Rock and she will be successful but they will quickly have to cover their tracks as trouble will be finding them.

Thrill Ride is the fourth book Black Knights Inc series by Julie Ann Walker. I liked the book. I still think for me the best were the first and second book but this one was no slouch. I was intrigued by these two characters from the previous book and how their interaction had not changed only got steamier in this book. Rock was a man who was not afraid to show how he felt about a particular woman, namely Vanessa. But Rock has a lot to deal with so starting something with Vanessa was not a smart idea. Vanessa was another one of the team and she was tough when she needed too be but with Rock she fell apart. She wasn’t a girly girl as she couldn’t be with the men around to tease her, then again with Rock she felt nothing but being a woman.

The danger is all around the team and Rock as they try to clear all that has happened. There is a lot more investigation that happens in this book but that is needed as they need to find out the truth and how to clear Rock’s name.

I will say I was happy with the ending but I felt that Vanessa forgave Rock a little too quickly as he nearly broke her heart towards the end. But as I said I wanted them to get that happy ending so finishing the book I satisfied. The last book that I have to read is Born Wild which I will be starting next.

Jake “the Snake” Sommers is back and is back for Michelle as she is the only woman he had ever loved. But he had screwed up their lives by sending her away and into the arms of another man. Jake will get the chance to be around Michelle to protect her but with danger coming closer he will find something that had been hidden from him.

Michelle Carter has been a widow for four years and loved her husband but the man she was in love with was now back. She doesn’t want to get close to him as she has a lot to lose but now she has to because she is in danger.

Rev It Up is the third book from Julie Ann Walker’s series Black Knight Inc. I really like this book but I will have to say that I liked the other two books I read previously a little more. I am still flying through the pages of the book and am enjoying the story with the characters.

Its funny as I was really interested in learning more about Michelle and I liked her. She was tough when it came to her little boy but I found her a little annoying at times. She was keeping a big secret and kept giving excuses when she should just be brave and tell the truth. It was unfair to keep that big of a secret. I get it because she was hurt and under a misconception but I still didn’t like the situation. Jake’s character was a touch guy but underneath it all he was a softie when it came to Michelle. Walker has the water works going on with Jake several times within the book, it all dealt with Michelle. I felt bad for him when it came to him finding out what was being kept from him. I wanted him to have that happy ending with Michelle as you knew it would happen but before any of that could take place they had to make peace with their past.

The villain is certain Johnny and he is a nasty piece of work especially with his obsession with Michelle and he gets close to doing some serious damage but he wouldn’t be getting away. Fortunately Walker will not have her main characters walking to their deaths.

The fourth story is with Rock and Vanessa in Thrill Ride which I will be reading next. 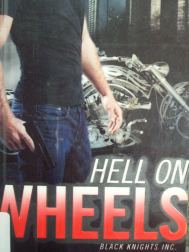 Nate “Ghost” Weller was not expecting his best friends sister to show up asking for help, but Nate would not turn her away especially with all that she had been through. He will find that there is more going on and it linked to a zip drive that Grigg sent to his sister, Ali.

Ali Morgan needed help as she knows that she is being followed and now almost mugged. She will go to Nate who she had loved since seventeen years old. Ali will demand to be part of the investigation as it was dealing with understanding what had happened to her brother, Grigg.

Hell On Wheels is the first book to Julie Ann Walker’s series Black Knight Inc. This is a scorching book and I figure will be a scorching series. I have the first five books in the series. First off loved this book. I could not put it down. It had danger, a lot of sex appeal, raw emotions especially guilt at least on Ghosts side, and a compelling plot that I needed to read. I will say that I am reminded of Laura Kaye and her Hard Ink series which isn’t a bad thing. The two series are different though with their style of writing and what is happening in them but similar with these tough men. I will say that for me there is more danger in Walker’s story and I loved that because it makes the plot compelling to read.

So Nate or Ghost as he is called is a man of few words and when he says them he is not loud or really obnoxious. He has guilt that is consuming him because of what he did. He also has guilt plaguing him as he feels things towards Ali and he knows that he shouldn’t. Ali needs help from the man she could trust with her life. She is a brave person with all she had to deal with but it is almost comical as her flaw is a weak stomach and that will result in a mess at the most inopportune moments. What I liked about Ali was she was scared but could handle herself thanks to her brothers training which comes in handy.

The scene with the torture I was expecting it to be bad and had a feeling with what happened in that room especially to Grigg. It was horrifying and I thought Walker did a good job writing those pages and how Ghost was forever changed because of that.

Becky “Rebel” and Frank’s “Boss” story is next to read and I can’t wait to find out what will happen.