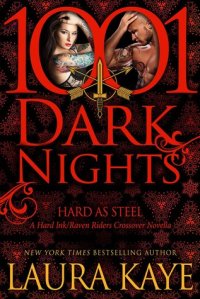 Jessica Jakes was on the run from some men who wanted her friends dead. Jess gets some help from a fellow tattoo artist, named Ike Young. He will take her somewhere safe but with them alone and in close proximity things will start to heat up.

Hard as Steel is a novella that is part of the Hard Ink series by Laura Kaye. I really liked this novella. I had wondered about Jess’s character who was another tattoo artist. She had been brought into the dangerous situation but I hadn’t seen her story linked with the series, then I found this novella.

I was definitely interested in reading Jess’s story because I wanted to know if there was more to the mystery with these soldiers. Now I have already read the rest of the series so I know the conclusion, but I had wondered if more detail was going to be given. Within the book there was no new detail about the soldiers except what had been found out in the other books.

Ike’s character was a man of few words. He closed himself off and did not let people know the real him. Though there will be one to break threw the exterior, Jess. So Jess’s character is a woman who likes to have fun and be wild. This will get her into trouble when a one night stand will bring danger to her and her friends. There is a vulnerable side to Jess which is mostly due to her past with what happened to her father. Ike had a similar past with a death that he places all the blame on his shoulders. I thought that the input of the background stories were a good addition as it gave the story more depth.

Within the book Ike and Jess fight the attraction but it is a loosing battle. They will find that passion together and it will ignite the pages. Laura Kaye writes those steamy scenes well.