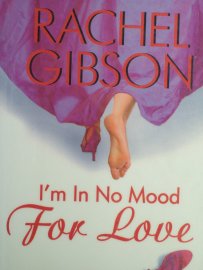 Clare Wingate thought the bridesmaid dress was bad enough, but she was wrong. Finding her fiance with the repairman was damaging for Clare but waking up after a night of drinking to a man who was her childhood crush was almost worse. Clare will find out that night wasn’t what she thought but will find out that her involvement with Sebastian will not be over.

Sebastian Vaughan was there at the hotel for the night and had no idea he would be running into Clare who was getting very drunk. Sebastian did the right thing and took care of her but let her think differently. He will find himself enjoying spending time with her and teasing her like old times, but he knows he doesn’t want anything series.

I’m In No Mood For Love is the second book to the series Sex, Lies and Online Dating by Rachel Gibson. I have now read several of Rachel Gibson’s books and have liked them. This one was no exception but it was not been my favorite of her books.

The characters were almost enemies at times throughout the book as they had an animosity to each other, of course that turns to passion pretty quickly. I liked that they didn’t just fall into bed but fought the attraction. That of course leads to bumps in the road for the characters but ultimately gives them a happy ending. It was interesting that both the main characters were writers and I did like that Sebastian started to read her novels and got inspired with her detail in the scenes she wrote.

I will be on the look out for more on Rachel Gibson. 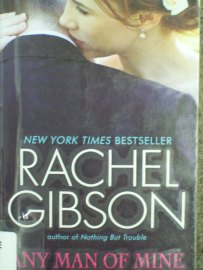 Autumn Haven went loose six years ago in Vegas and married a man she only knew for five days. The honeymoon was over the next day and her husband left. Her life would be forever intertwined with him as they had Conner. Autumn had done her best to avoid the hockey player but she will start to see him a lot more and feelings start to come back.

Sam LeClaire was very good at hockey. He played hard on and off the ice. There were plenty of women who wanted to be in his bed but one. He had Autumn six years ago but he couldn’t be with her then. Sam is thinking differently now as he wants to spend more and more time with his son and find a way to get Autumn back.

Any Man of Mine is the sixth book to the Chinook Hockey Team from Rachel Gibson which was a fun book to read. It’s funny as each book I picked randomly from Gibson they all were about this one family or extended family. I started with Stella and moved on to the next book with Sadie, Stella’s half sister, who was with Vince. Then in this finally book there is Autumn who is Vince’s sister. All of the characters were connected and it was fun to read about them.

So the characters of Autumn and Sam were not good together as they could do nothing but fight. The fighting seemed realistic between them and I liked that they did their best to think of Conner’s best interest and it will be Conner that will bring the parents back together. I liked Autumn for her determination and wouldn’t back down and always did what was best for her little boy. Sam was a hot head and used to things his own way. He does change for the better as his partying ways dwindles. He wants to be back with his ex-wife. Getting Autumn back wasn’t an instantaneous concept for Sam but the more he was around them the more he wanted to stay which was sweet. I did like Sam even though he was a womanizer.

I will be looking for more Rachel Gibson’s books. I don’t know if it will be a new series, continuing or just a novel from the author. 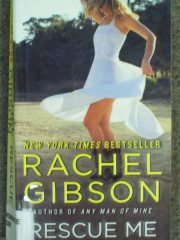 Sadie Hollowell was coming back home for a wedding but will find herself staying longer as her dad will find himself in the hospital. Sadie will find other things to do when she is not in the hospital and that is to be with Vince. It was supposed to be causal but Sadie could not help but get her heart involved.

Vince Haven was coming to help out his aunt but will find himself doing more than help. He will find himself the owner of the Gas and Go within days of visiting. Vince will be working on the renovation but will be distracted with Sadie who was only supposed to be a one night stand.

Rescue Me is the second book to Lovett, Texas series from Rachel Gibson. I have only read one book from Gibson and it just happened to be about Sadie’s half sister. I liked the book with Sadie’s southern charm but I will have to say that I had to read several pages to really get into it. It wasn’t an instant love but towards the end I was cheering for Sadie and Vince to find a way to make it work. Of course reading the other book I already knew but it was fun to read how they got to their happy ending.

Now within the story I felt I was missing something with Vince’s relationship that he had with his soon to be brother in law and his sister Autumn. I found out that one of the other books, Any Man of Mine, I got from Rachel Gibson tells the story of Sam and Autumn which I will be reading once I get to that particular book in my pile.

Stella Leon has had a rocky path and it wasn’t getting any better with her boss being punched out by a stranger who wants to talk to her. Stella will find out from him that her half sister wants to meet. Beau Junger was doing a favor for his friend’s fiance to find her half […]