Diantha Lucas needs to find a man to marry at least that is what society tells her. Diantha has something else in mind and she will find help from Wyn Yale who will tempt her with what she craves.

Wyn Yale is a agent from the Falcon Club and has a mission. He will not let any temptation distract him from his mission even if he can’t keep his hands off of her.

The third book, How a Lady Weds a Rogue, is from Falcon Club by Katharine Ashe. For me there was a little more humor in the book then the others. I think it was because of how Diantha and Wyn couldn’t keep their hands off each other or who Diantha drove Wyn crazy with her outburst. The rules were also cute addition to the story that kept that side of the story lighthearted.

For the plot it was interesting but personally I was more intrigued with the characters themselves as they took precedent over the plot for me. I am interested in finding out if Katharine Ashe will be continuing the Falcon Club series with more of the agents. 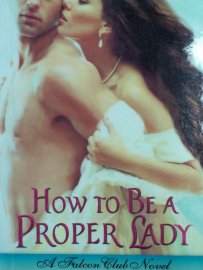 Viola Carlyle has lived her life how she wants. She has freedom that a Lady would not have. Viola will be found and told of her past but she will not be willing to change her life as she knew it would confine her desires. But with the tempting Captain Jin Seton she might be willing.

Captain Jin Seton needed to find Viola in order to pay his debt and he always remembers who he owes. Jin finds Viola and knows instantly she is going to be trouble but he will find a way to take her back to her family. Even as she is tempting him the whole time.

The second book to the Falcon Club series is How To Be a Proper Lady by Katharine Ashe. I found this one entertaining mostly because of Viola and her ways of living. I don’t read too many books with a woman making her life on a ship but Ashe creates her character well. She was determined and stubborn and she was out of place when it came to being girly. There was a certain vulnerability in her character and she never succumbed to what others wanted even when they tried to make her into a Lady. She never lost herself.

The romance was there in the book but it wasn’t just Viola and Jin. There was Viola and Aidan Castle. Reading Castle’s character you knew he wasn’t the right man for her. Jin would be a better match and he shows that he is a gentleman when he gives her the chance to decide.

The ending stayed true to the characters which I liked and Ashe gave a happy ending for Viola and Jin. I checked out the third book where Wyn and Diantha will be crossing paths. 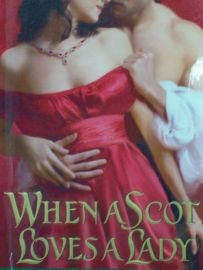 Lord Leam Blackwood was going back home to Scotland but with unplanned snow he was stuck at an inn with several of his friends and a temptation in the form of Kitty Savege.

Kitty Savege didn’t expect to spend the holiday at an inn. With the arrival of Lord Blackwood she found that her guarded heart started to beat a little more for this man who wasn’t all that he appeared to be.

It was fun to start of with a spy who was at the point of retiring but instantly getting sucked back into his old life. I also liked the band of men who were part of the group along with the one woman.

The character of Leam was all that you wanted in a hero as a handsome roguish Scotsman. Kitty was kind and had a wildness about her that sent Leam’s character spinning. It was fun to read as they interacted. Ashe will also keep you on your toes as there were several twist and turns throughout the book along with a happy ending for Leam and Kitty which was needed.

Viscount Steven Ashford goes by many identities and only few know his true one. He uses each for a purpose and that one is to find a criminal and punish him. What he did not think would happen is the beautiful Valerie Monroe walking onto his ship in the heart of danger. He is dressed as a clergy and must keep the charde up or all is lost.

Valerie Monroe needs to get back home. She winds up on a ship which is held captive by a vile man. A man of the cloth saves her and tempts her at the same time but all is not what it appears to be. Valerie will be betrayed by the man as she find his true identity or one of many. Her heart is already in pieces as he tramples upon it but she will be able to pick up the pieces. She will find the solution as she becomes involved in the very plot Steven was hiding from her.

As far as a plot goes it was good. There was interesting turn of events but I was not floored by this book. Swept Away By A Kiss by Katherine Ashe is well written and the sensual parts were steamy. I think with Steven Ashfords ever changing attitude was a little confusing and frustrating that it turned me off as a reader at times which was truly for me the only problem.

The continuous plot of sabotage was interesting to read and you wondered how it would end and who would be caught in the cross fire.