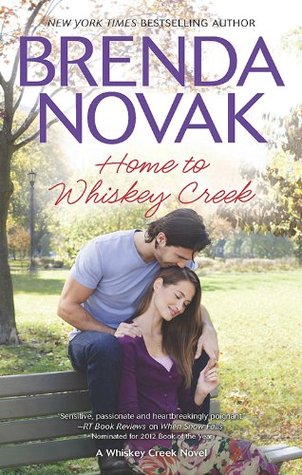 Adelaide Davis was back in Whiskey Creek to help out her grandmother. She would never have volunteered to come back after that night when she was sixteen but to help her grandmother she would do anything. Now that she is back she is quickly set in danger once again and this time she will have a person to rescue her, Noah Rackham.

Noah Rackham has lived through tragedy when his twin brother was killed and his grief was still there. He will soon find someone to distract him when he saves Adelaide from inside the cave. Since that encounter Noah will want to stick close to this woman as he will find that she is someone he wants to take a chance with.

Home to Whiskey Creek is the fourth book to the Whiskey Creek series by Brenda Novak. This was an emotional story. I was sitting there reading hoping for some thing good to happen to Adelaide after all that had happened to her all those years ago. I wanted justice and for those four men to take the punishment. You are not disappointed with what happened as the system worked.

Adelaide was courageous with coming back to the town that had hurt her long ago. I wanted her to keep strong and be brave, and take a chance especially with Noah who was the man she wanted. Now Noah was a player but he was wanting more and I loved that he hated that he was considered a player. He goes after Adelaide with a determination but what is really impressive was when the situation got really tough he stuck around. He also sided with her when most would have abandoned her.

The mystery of who was behind the attack in the beginning was unclear and I wasn’t sure which one did it. I had thought of someone but that was ruled out towards the end. I wasn’t surprised with the person as he was the one who started this whole thing all those years ago. I wondered why he had to even start up again because if he didn’t he would’ve gotten away with it all. I am glad that Novak brought justice to the situation.

There was the issue with Baxter in the story. I am happy that everything is finally out there but feel for him as he just lost his chance with the man he loved, even though there was no chance they would be together.

After this book I have the fifth book with Sophia and Ted. I have been wondering about these two since the beginning and am excited to read their story next.