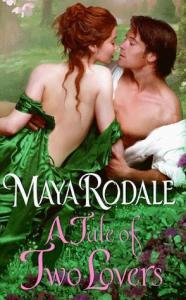 Lord Simon Roxbury was a rake and had no desire to change that is until his father too away his way of living. He was to marry or become penniless. Roxbury liked his wealth and reluctantly chose marriage which he found out would not be easy when a columnist decided to give rumor to him liking the opposite sex.

Lady Julianna Somerset created her column after her husband died. She lived for writing and was good at discovering peoples secrets. She will write a scandal relating to Lord Roxbury which will earn her an enemy with Roxbury.  This will lead to her downfall in reputation which will lead her needing to work with Roxbury.

A Tale of Two Lovers is the second book to Maya Rodale’s series Writing Girls. This was another great book from the author. The plot flows easy as I read the story about Julianna and Roxbury.

Now this was a romance novel certainly as you can tell from the cover but these two characters were not in love whatsoever, at least not in the beginning. In the beginning they were mortal enemies. It was like they brought out the worst in each other yet underneath that anger was the wonder of seduction and lust. Roxbury was all about the seduction but it was more to teach her a lesson and Julianna thought about lust but did not want to push that idea to reality as she had been burned before in her previous marriage. They start getting along as they spend time with each other which is partly due to the need of repairing their reputations. I liked that they bonded over the hunt for the mysterious Man About Town and his identity.

Alright so now about the Man About Town this was a mystery. This person was a columnist who is competition for the Writing Girls. The person could be anyone but an older man since he had been doing the column for forty years. So my guess for this man was not even possible until Rodale gave one clue and then I knew exactly who this person was. I liked how Rodale ended it with this person which certainly gave Julianna the upper hand.

I am reading the fourth book next. I had previously read the third book to the series which featured Eliza. I can’t wait to find out more on Mr. Knightly.