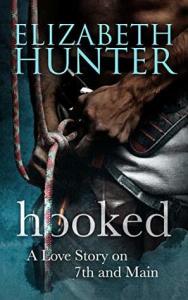 Tayla McKinnon has to make a decision. She needs to make a choice between her dream job and a relationship with Jeremy. With every date she finds herself falling for Jeremy but she is not a small town girl. Tayla loves the city and the cultural but doesn’t want to make those sacrifices her father had made.

Jeremy Allen has wanted Tayla the moment he saw her and will find out that he was going to lose her. He wanted to show her what their life could be together, but he knew that he could not force her decision. He wanted her to make the right decision for herself.

Hooked: A Love Story on 7th and Main is the second book from 7th and Main by Elizabeth Hunter. After reading the first book which I loved, I had pretty high expectations and this story did not disappoint. Although, I will say that I liked the first one more.

I thought that Tayla’s character was fun. She was outgoing and said what she wanted. Although, she was a little timid when it came to relationships. Throughout the story I was cheering for her and Jeremy to be together. Jeremy was pretty much the perfect man and you would think that would get annoying but it really didn’t. I really liked Jeremy and thought he was so sweet and loved that he was supportive, but on the inside the idea of Tayla leaving was tearing him apart.

The third book will be about Cary and Melissa which I can’t wait to read.

Emmie Elliot walked back into her hometown determined to sell her grandmother’s bookstore, but she could not take that step. She decided to keep the store open and was going to take on a tenant, which was when she would be meet Miles Oxford “Ox”, who was a tattoo artist in need of space to rent. They made the rules to keep everything platonic right before they opened but those rules were meant to be broken.

Ink: A Love Story on 7th and Main is the first book to the book 7th and Main by Elizabeth Hunter. I was recently recommend to read this book and I am glad I did, I loved this book. It was right up my alley. I am a lover of books and have a tattoo, in fact it is a book tattoo. I loved the concept of a bookstore with a tattoo artist. By the way I really love the cover of the book.

Emmie was a great character. She seemed buttoned up, but she had a many layers and you were at times cheering for her to not give up. The attraction between them was steamy and pretty perfect. Now Ox was a pretty fantastic character although he could be dense when it came to doing the right thing with Emmie and it was those little thing which kept them from getting truly close right away.

I am looking forward to reading Hooked which is the second book to the series.

Bran Berry has been after Sahara Silver since he first meet her but all she wanted was for him to join her bodyguards. Though Bran can tell she wants more, but business comes first. Then Sahara will be taken and it will be up to Bran and the other bodyguards to find Sahara.

Fast Burn is the fourth book to the series Body Armor by Lori Foster. I enjoyed going back to this series and this was a very good book. Although, there was one line that had me laughing. It was from the movie Taken. The one line that he is saying to his daughter in the second movie, “I am going to be taken”. That had me laughing out loud because it was too familiar.

I liked Bran but there were times when you wanted to punch him. He was a little controlling with the relationship but I could forgive him because he was a good guy. He wanted to do protect Sahara, he just had to admit that she was strong on her own and he does, it just takes some time. Sahara was a strong woman who knew how to kick butt, though she was a little out of her league with kidnappers. Although, she did not make it easier for those kidnappers.

There were some twists within the book that was interesting. I kind of wish there was a little more detail with the outcome but it was still good. 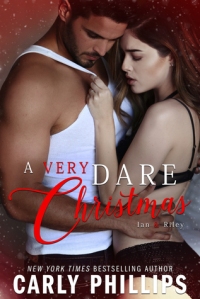 Ian and Riley are back in this quick short story! A Very Dare Christmas is a novella, number 6.5, in the series Dare to Love by Carly Phillips.

Its Christmas time and Riley is feeling overwhelmed with everything she has to do and her husband sees her exhaustion. Ian will do what any good husband would do, he will whisk his wife away for a romantic getaway to reconnect.

I really loved reading this story because it gave an insight into Ian and Riley’s lives which seemed realistic. The romance was leaving because all their attention was on their children. Getting back the romance was easy for them and very steamy. Though after reading this short story I found myself annoyed because it was like a teaser to the series. I want Carly Phillips to finish the series. I believe there are only three more siblings to write about and I just want them to be written so I know what is going on. I also hope that there is some actual justice when it comes to their cheating father.

I am looking forward to reading more from the series. Please Carly Phillips finish these novels! 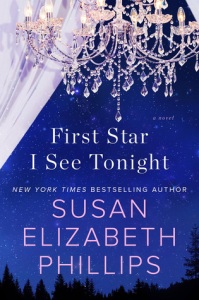 Piper Dove was trying to make something of herself and bring back Dove Investigations. She will get a job but will be found out quickly, though it will turn around when he hires her.

Cooper Graham was an ex-quarterback who had opened his own nightclub. He was living life but then Piper thrust herself into his world and it was forever turned upside down.

First Star I See Tonight is the eighth book to the series Chicago Stars by Susan Elizabeth Phillips. I enjoyed this story. It has been about two years since I had read the seventh book. Luckily you don’t have to know the characters from the previous book, although they are mentioned, this could be read as a standalone novel.

Piper’s character was out there. She was a little crazy but really it was a defense mechanism to keep those around her at an arms distance. Even though she was unconventional she got the job done. When it comes to relationships she doesn’t want one as she knows it will lead to disappointment. I was glad that Coop was resilient. Coop’s character was a man who had gotten whatever he wanted and he liked it that way. Getting together with Piper was not in his plan but he went with it. I liked that Piper kept him on his toes and that he never truly gave up.

The rest of the novel is filled with strange friends, some thieves, kidnapping, and a buy out that was going wrong. There was a lot that was happening but somehow it fit and made sense.

Kate Battista is the family member who does everything for her family. She wants out but doesn’t really know how or what she would do when that happened. Kate will be blindsided when her father wants her to marry his coworker, so the coworker can stay in the country.

Vinegar Girl is a novel by Anne Tyler is a modern version of The Taming of the Shrew. First off I liked this book but it was a gradual like. I did not open this book and begin to read loving it. In fact I was wondering what the big deal was about the book. My cousin loved it and I was giving her the benefit of the doubt. I found myself slowing being pulled into the story. It was a story that charmed me and I found myself really enjoying the book as I turned the last page.

Kate’s character was a woman who wanted out of her situation but like a dutiful daughter she did what she needed to do. I liked that Kate had a sarcastic side and she will finally stand up to those around her at least some of the time. Personally I wasn’t really sure if her father’s coworker would be a good match. He seemed a little strange and I didn’t like he was going along with the plan but as the story went on I really ended up liking them as a couple. They balanced each other out.

I thought that the father was hopeless but he was a good man. Then there was Bunny who was a spoiled child and going after whatever she wanted. I really don’t think Bunny learns anything at the end of the book, but I was okay with that as I was just happy Kate and Pyotr got their happy ending. 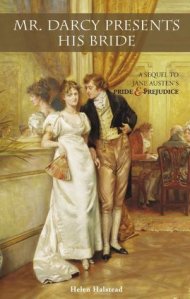 After reading all of Jane Austen’s stories I wanted to read just a little more but as I couldn’t get any more from Austen I decided to try a book that was a continuation of Pride & Prejudice. I had gotten Mr. Darcy Presents His Bride years ago for Christmas from my parents. It has been awhile since I read the book. I was happy to read this book again because it is really well written and a great sequel to a book I love so much.

I liked how Halstead wrote the continuation because it really showed how the characters lives had altered into a new way of living. I loved how Elizabeth felt overwhelmed but because of her charm she was able to glide through society, though it was still a struggle. She had to make sure not to embarrass her husband and to make sure they don’t lose their love for each other. It was interesting that Halstead gave each character a chance to have their own thoughts told on the page. You were really able to get to know the characters from Halstead’s words.

There was definitely some sad news that I didn’t like towards the end but you knew it would happen. Though I think Halstead brings it together to give you that happy ending which many have dreamed for Elizabeth and Darcy.

Well that is it for me with reading stories all related towards Austen, at least for now. I am sure I will come up with some more adaptations or inspired Jane Austen stories through my search of other authors to read.

Gayle and Books
Blog at WordPress.com.