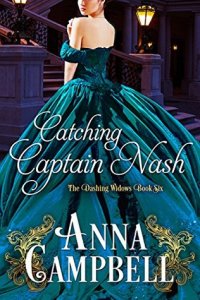 Captain Robert Nash was presumed dead for the last five years but he was back home and wanted his life back. He will come home and find his wife was about to be engaged to another man. Robert will put an end to that engagement but will wonder if he will be able to make Morwenna happy as they had been.

Morwenna Nash had grieved for five years for the husband that she had lost. Finally she has accepted a marriage proposal even though she did not love the gentleman. She will be stunned when her husband comes back from the grave. She hopes that she will be able to help him back into society and reclaim the love they had.

Catching Captain Nash is the six story to the series Dashing Widows by Anna Campbell. I actually enjoyed this book. The last couple stories have been good but not as good as the original trilogy. I was hesitant to read this one as the reviews were not great. There was not a lot going on with the story, it was primarily about a couple renewing the love that they had lost.

Now I will say that I think to do this story justice it could have been longer. With the story being so short the sex scenes were strange to me. I would not think that after five years of absence Morwenna would sleep with her husband the same night he came back, she would have been in shock. Though saying that I did like the relationship between them. I was cheering for Robert and Morwenna. I thought the scene with his daughter was sweet and I really enjoyed the epilogue. It was full of happiness and fluff but I would not have it any other way.

Anna has written another story in the series which features the man Morwenna jilted. This one will be a full length novel. I have a feeling I will be reading this story in the near future. 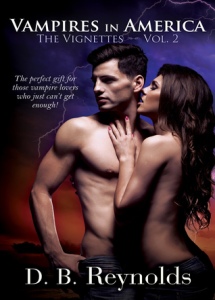 Vampires in America, The Vignettes Vol 2 is a collection of stories from the series. D.B Reynolds had written Vol 1 several years ago which were very enjoyable. Vol 2 was also very enjoyable and most of them were very steamy. I liked some stories more than others. Most of the stories were very short. There were a couple that were a little longer but again very short.

Cyn and Raphael’s stories are of course some of my favorites. Then there was one with Jared, who is Raphael’s lieutenant, which was very sweet. The one that I was looking forward to was Luci and Juro’s story. The story was a short story at the beginning of their relationship.

I am now waiting for the next installment of the series which will be Quinn. 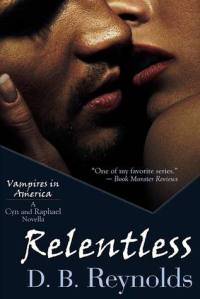 Raphael has decided it was time to bring the fight to the Europeans. He needed to send a message especially after the most recent attempt to harm his vampires and his Cyn. He will travel to Paris and bring the fight to Laurent who had taken over after Mathilda.

Relentless is a novella, number 11.5, of the series Vampires in America by D. B. Reynolds. I really loved this novella though maybe not as much as the others. The beginning certainly pulled me in with the shooting. There were several parts in the middle that were a little slow for me but the fight scenes were good. It is always amazing how much power Raphael truly has. What I loved was the interplay between Raphael and Cyn which is always something I love to read.

So part of the book was introducing Quinn who will be the next Lord of Ireland, which will be the next book that is coming out this year. I am interested in learning more about Quinn in his book. Though what intrigued me greatly was the woman he had followed at the end of the story. I am sensing that she will be like Buffy the vampire slayer, but time will tell.

I am reading Vampires in America: The Vignettes Vol 2 next.

Sophia will enlist the help of her fellow lords to help find her mate, Colin. She had been betrayed by one of her own and needed help. She will entrust the help of Eleanor her trusted bodyguard and Lucifer who was recommended by Aden.

Lucifer is the eleventh book to the Vampires in America series by D.B. Reynolds. I really loved this book and it was gripping especially with Colin being taken by those he had trusted. I was hoping that Colin would not be killed which would break Sophia’s heart, it was breaking her heart with every photo she had received of Colin’s torture. I appreciated that Sophia’s part was limited and it was more focused on Eleanor and Lucifer who were searching for Colin.

Eleanor and Lucifer were interesting. Their relationship was lustful and quickly turned to love when Eleanor had still been human. Their relationship ended when Eleanor was turned. She had thought that Lucifer would no longer want her. I thought Eleanor could have tried and gone back but in the end it had not matter because they had found each other again. I liked them together, they were each strong in their abilities as vampires, Lucifer’s stronger of course but Eleanor was no slouch.

I think the epilogue was really well written especially the words that Raphael had said to the council, which ended the story.

I am reading Relentless next.

When Raphael was released from Mathilda’s magical cuffs, Cyn made a promise to Nick that she would help find them. Cyn will be confused about Nick as everything she knew about him had been a lie, but a promise was a promise. Cyn, Raphael and Nick will search together to find the magical cuffs which will lead them to a dangerous collector.

Compelled is a novella, number 10.5, to the series Vampires in America by D.B Reynolds. This one took a turn and was focused more on magic with Nick as a sorcerer, which was interesting. I liked this one, did not love it, but certainly liked it.

I suppose I am biased because I don’t want someone coming in between Cyn and Raphael. Nick was very flirty with Cyn and I was happy that she was in no way reciprocating those flirts. Cyn’s heart belongs to Raphael. I was happy to read that he really did not want to get back with Cyn since they were really never together but he was lonely. Nick’s character does get better towards the end of the novella. He is still sarcastic but he is changed as he was determined to change.  I will admit the story with his warriors was interesting, this also brings in four more stories that D.B. Reynolds will be writing. There are two of those stories already written for two of the warriors. I do hope that Nick will find his own person to love especially if he has been alone for thousands of years and I would like to know more about Nick and his powers. Also the war between sorcerers and vampires.

The collector was the dangerous element of the book. He was a interesting bad guy but it was a very short scene as it was a novella. What irked me was that Cyn has not learned to go into the dangerous places. She had caution a couple books ago but in this novella she was back to being reckless with no back up.

I am reading Lucifer next. 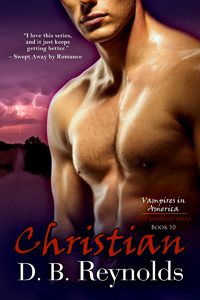 Christian Duvall was determined to be the Lord of the South. All he needed to do was defeat any challengers as Anthony, the present lord, was stepping down. Although, Christian will find that Anthony will be a lot of trouble especially with the woman Christian wanted.

Natalie Vivant Gaudet was a forensic accountant who was working for Anthony but only because he had blackmailed her. She will be working at the office when Christian walks into the office. Natalie will instantly want Christian and she will do what she can to protect him.

Christian is the tenth book to the series Vampires in America by D.B. Reynolds. I really loved this book. I wasn’t sure how I would like Christian since his sire was Mathilda who was very evil. Christian for me was a character I could easily like. He was a warrior and had good intentions with wanting to be the Lord of the South. He was also very strong, much stronger than any other vampire had known. This helped with the fight scenes which were in the book and the challenges, and those fight scenes were intense. Natalie was a smart woman being a forensic account, which I loved. I thought that in the beginning she was a little too much with the desire for Christian but I of course wanted them together. I did like that she was a woman who could handle herself. She was by no means like Cyn but she could handle some of the bad things that had come her way.

Anthony was a very devious lord. I disliked him right away as he tried to cheat and used his vampire powers to do that. I was horrified that he wanted Natalie and would use his mind control to make her want him. Luckily Christian was a strong enough vampire to stop Anthony before Natalie’s fate was sealed.

I am reading Compelled next.

Raphael and Cyn must face a dangerous situation when someone from Raphael’s past kidnaps him while he is in Hawaii. An enemy from Europe has descended and wants Raphael’s territory.

Deception is the ninth book to the series Vampires in Americas by D. B. Reynolds. I really loved this book. It was intense with Raphael’s kidnapping and how Cyn and the team find a way to save him.

Cyn’s character is once again a bad ass. With every book she is getting more and more blood thirsty. I don’t want her to appear so invincible but I do love the kick ass attitude. She is a woman who would do whatever she needed to protect her mate. I loved that Raphael and Cyn have a connection as that helps them talk to each other in their dreams, which was helpful.

The villain, Mathilda was pretty viscous but really only in the cunning way. She was a woman who liked to get her way and when she didn’t get her way she had a temper tantrum. Mathilda’s way of capturing Raphael was underhanded as she using a lot of vampires and magic. The magic aspect was interesting which it sounds like there will be more with Nick’s character. I had liked Nick in the first book because he was just a guy but I don’t want him causing problems. I just really hope that a love triangle doesn’t happen with Cyn, Raphael and Nick. It is not needed.

I am reading Christian next.

Gayle and Books
Create a free website or blog at WordPress.com.