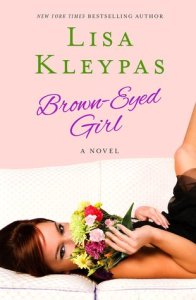 Avery Crosslin was a wedding planner who was trying to make her business profitable. When she lands a big client she is hopeful this will skyrocket her career. Though this job will have her getting close to Joe Travis, the one man she was trying to avoid. He was a temptation that she wanted to avoid, but Joe will not let her forget him.

Joe Travis had seen Avery and wanted her instantly. Joe will do all that he could do to get Avery’s attention. He will slowly entice her, seduce her, and show that he truly cares for her.

Brown Eyed Girl is the fourth and final book to the series Travises by Lisa Kleypas. I really enjoyed this story. For me it was a slow like. At first it was a little slow with getting to know the characters, but once I got to know them I was all in with the story.

Avery’s character was a dedicated worker and doing her best to elevate her career. Work was all she did as she had been burned before by her ex. Avery was guarded but with Joe she was letting down her guard. The part with the dog was too cute. It made me want to adopt another animal, but with a dog and a cat already I don’t have the room. There was another cute part with dogs that was at the ending, which gave a sappy yet very satisfying ending. Joe’s character was a man who had gone through a tragedy with losing his father and an accident that could have killed him. You would think that Joe would be withdrawn but he was easy going and it was clear he was besotted with Avery. I liked the way he pursued Avery. He confounded her when he couldn’t keep his hands off of her to being polite and almost indifferent. Of course you knew the whole time Joe wanted her but he wanted her to feel the same, and she will.

The bride to be and mother were terrible. At first I thought the bride to be was just a little spoiled but then I read the truth and it wasn’t good especially for the groom. I was happy that Avery went with her conscious on the situation.

I thought the Travises series was one that was worth reading.