I don’t normally check out just any book. I usually like to do some research on what the book is about and if it is part of a series. Well I guess I am looking for a change because I had gone to my library and just browsed the new fiction. The book Death, Taxes and Sweet Potato Fries immediately caught my attention. I am an accountant so I was immediately intrigued with a book with the word taxes in the title.

IRS Special Agent Tara Holloway is given a new case with the coyotes which will lead her to her ex-boyfriend’s company, who could be part of the situation. Tara will have to find the missing girls before the coyotes could get away with human trafficking and she will get some help from her team and fiance, Nick.

Death, Taxes and Sweet Potato Fries is the eleventh book to the series by Diane Kelly. I knew immediately as I started the book that it was a story already in progress but it did not stop me from enjoying the book. This was quirky and a little out there but overall enjoyable.

Tara’s character is a woman who can do what she wanted. She didn’t need to be assisted by a man but she will give in every once in awhile to the man she loves. I liked that Tara was a take charge but that can often get someone in trouble. I liked the relationship she had with Nick. It was stable and you knew that Nick would be sticking around. He also balanced Tara’s character.

I am not sure that I will read the entire series even though I found this one to be entertaining. I will look into the series and see what other cases that Tara has to solve.

Kelly Murphy is a tulip farmer with her father who she is very close to since her mother had left thirteen years ago. Her sister had left them three years after their mom. Then after ten years away her sister Olivia will walk through the door hoping to reconnect with her family.

Secrets of the Tulip Sisters is a novel by Susan Mallery. I haven’t read anything from Susan Mallery in awhile but I was given a free copy of this book and thought to try it out. I was blown away with this book, I really loved it. I was hooked right away and felt for the characters as if they were old friends.

The life of these Murphy sisters is very complicated especially with the secrets they are holding from each other. I wouldn’t go into the secrets they are holding back from each other but they are secrets that will hurt each other. I loved that even though the sisters were at odds half the time they were still sisters, there was still love there. The other story that is being told other than Kelly and Olivia is Helen, who is Kelly’s friend. Her story was engaging as well and its all connected to the Murphy family.

What drove me crazy was the mom who flew back into their lives. I wouldn’t go too much into the situation but let it be said that she is a truly selfish person. Then there is the father. I really liked him but he frustrated me as he didn’t stand up to his ex-wife. Though by the end I was back to really liking his character again.

This was a really engaging and enjoyable novel.

Stephen Crenshaw, Marquess of Dunwich, was back in England after several years away as a soldier. He had been a rake back then but he has changed. He knew what was important and that was getting the woman he had loved back.

Lady Faith Westover, daughter of the Duke of Strathmore, had loved Stephan. She was blinded to his rakish ways but when he had left her eyes had been open. Now with Stephan back Faith will try to keep away but he wouldn’t let her, not until she forgave him.

Once a Scoundrel is the fourth book from the series The Secret Life of Scoundrels by Anna Harrington. I really enjoyed this novella. It was short and straight to the point. The novella covered a lot, a betrayal, love, second chances, rumors, and friendship.

Faith’s character had been hurt by the man she loved and wasn’t ready to forgive and forget. Her betrayal was understandable. I think the betrayal might have been a little over dramatic, though nothing annoying. I thought Faith was a refreshing young lady with a good head on her shoulders and now was guarded with her heart. Stephan will find a way to her heart but it will be Faith to make the ultimate decision. Stephan’s character had changed, and changed for the better. I liked that he truly did change and it wasn’t a facade in order to get what he wanted. He was sincere and filled determined to do right in his life. I liked that he had to work to get what he wanted.

Amber Hudson has been dating Noel for a while and she wants more, but she wants Noel to declare himself first. She had tried everything but nothing was working. Then a tragedy strikes a friend and Amber’s world will get turned upside down with a new addition to her family.

Noel Poet did not want children but he wanted Amber. He just wasn’t good at showing what he wanted. When Amber takes guardianship Noel will surprise himself by helping out. He will start to wonder if he could have it all.

A Buckhorn Baby is part of the Buckhorn Brothers series by Lori Foster. I really loved this sweet story. I had been waiting for Amber’s story and I was not disappointed.

Amber’s character is the matchmaker of the group but when her friend dies she becomes guardian of June. Amber quickly falls in love with the little girl but knows that she will lose Noel as he was adamant about not wanting children. I loved how Amber was willing to give up everything for this child. I also liked that there was a different side to Amber. With June she was not her perfect self, she was unorganized and tired. It was realistic for a new mother. Noel’s character was a good man and a firefighter. He was also against children because of his job. It was sweet how he was taken in my June. She hung on to him and did not let go. Noel’s life would be incomplete without Amber and June in his life. The ending to this story was very sweet and very true to this Buckhorn Brothers series.

Now is this series done or are we going to get more? There are still Gabe’s daughters who have not gotten their story. Only time will tell.

Avery Crosslin was a wedding planner who was trying to make her business profitable. When she lands a big client she is hopeful this will skyrocket her career. Though this job will have her getting close to Joe Travis, the one man she was trying to avoid. He was a temptation that she wanted to avoid, but Joe will not let her forget him.

Joe Travis had seen Avery and wanted her instantly. Joe will do all that he could do to get Avery’s attention. He will slowly entice her, seduce her, and show that he truly cares for her.

Brown Eyed Girl is the fourth and final book to the series Travises by Lisa Kleypas. I really enjoyed this story. For me it was a slow like. At first it was a little slow with getting to know the characters, but once I got to know them I was all in with the story.

Avery’s character was a dedicated worker and doing her best to elevate her career. Work was all she did as she had been burned before by her ex. Avery was guarded but with Joe she was letting down her guard. The part with the dog was too cute. It made me want to adopt another animal, but with a dog and a cat already I don’t have the room. There was another cute part with dogs that was at the ending, which gave a sappy yet very satisfying ending. Joe’s character was a man who had gone through a tragedy with losing his father and an accident that could have killed him. You would think that Joe would be withdrawn but he was easy going and it was clear he was besotted with Avery. I liked the way he pursued Avery. He confounded her when he couldn’t keep his hands off of her to being polite and almost indifferent. Of course you knew the whole time Joe wanted her but he wanted her to feel the same, and she will.

The bride to be and mother were terrible. At first I thought the bride to be was just a little spoiled but then I read the truth and it wasn’t good especially for the groom. I was happy that Avery went with her conscious on the situation.

I thought the Travises series was one that was worth reading. 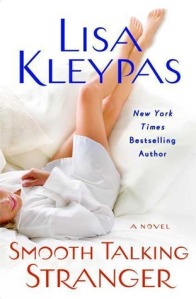 Jack Travis was astonished when a woman and a baby showed up at his office claiming the child was his. Jack knew he was not the father but instead of sending them away Jack helped them. He wanted to keep Ella and Luke close to him.

Ella Varner always helped her sister which was why she ended up taking care of her nephew, Luke. She was out of her depth but was determined. Ella will end up getting help from an unexpected source, Jack.

Smooth Talking Stranger is the third book to the series Travises by Lisa Kleypas. I really loved this book. For me this series gets better and better. Hopefully the last book will keep going with the trend.

For me this was all about character development of Jack and Ella. These two characters very much had commitment phobia. Yet they were placed together and feelings towards each other started to take form. I really loved Jack. He was a dater of women but from the moment he saw Ella he wanted her, and for more than one night. I liked how he handled Ella with care and truly wanted her for her. He was very persistent. He was also very patient when helping with Luke. Ella character was a fixer. She tried to help her sister but it never really helped, though she always tried. That is why she helped take the baby Luke. She was very determined especially keeping away from Jack. I liked that she did try her best to stay away from him and didn’t just jump in his bed. Their courtship was a slow seduction that is until Jack made it clear to Ella with what he wanted.

Ella’s mother was a piece of work. She was all about herself and very manipulative especially when it came to Ella. I liked that Jack was able to handle her but it broke my heart how she couldn’t truly love her daughters. Then there was Tara’s character who started the whole mess. It wasn’t that I disliked her greatly but she did think more about herself than others. I will say that she made up for her mess at the end.

I am reading the last book to the series next.