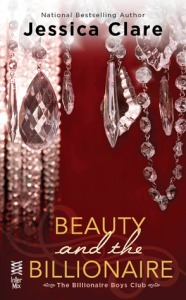 Hunter Buchanan was a loner except for a few select people he let into his life. He kept himself sheltered because of the hideous scars that were on one side of his face to his chest. Hunter will find himself getting interested in one woman, Gretchen, who fascinated him. He lures her to his mansion but when he tries to get to know her he keeps screwing it up, until she helps take charge.

Gretchen Petty was miserable being a ghostwriter. It just wasn’t her passion but this new ghostwriting job will intrigue her. The job will have her going through hundreds of letter in a mansion. But the job is not the only thing that intrigues her, the owner of the mansion, Hunter, will have her curious and she will not stop until she truly knows Hunters’s story.

Beauty and the Billionaire is the second book to the series Billionaire Boys Club by Jessica Clare. I really, really loved this story. I know why, its because this book is loosely based off to the story Beauty and the Beast, and that story is one of my favorites from childhood.

So Hunter is considered the beast in this story who had a tragedy strike him when he was only ten years old. I was horrified with what had happened to Hunter at that age. It was even worse with his fathers betrayal. I hated that Hunter was so alone in his life but it was natural for him because of the scars that were embedded into his skin. I liked his character even though he was so quiet and angry. So then there was Gretchen who was vibrant and beautiful but she also had a temper. At times Gretchen annoyed me in the other book, she was so moody but that is just part of her character. I liked that she was a take charge type of woman especially when she wanted to help Hunter and get close to him.

It was predictable that problems would occur within the story but I liked how Jessica Clare wrote the situations and was able to find a way out of them for her characters.

I am so far loving this series and I am going to be reading the third book next.