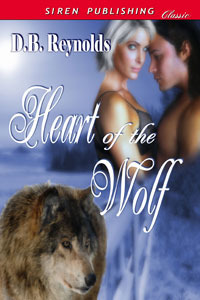 Kathryn Avinger had to endure ten years of marriage to a sadist man who could have been her grandfather but is now a widow. She had prayed for someone to save her but as the love of her life had abandoned her, she had to save herself. Or save what was left of her and thanks to the wolf inside of her, but now she will need help as someone is after her.

Renjiro Roesner was exiled ten years ago but what kept him away was the fact that the woman he loved had married another. He is back ten years later to find her widowed and now in danger as someone wants her dead.

Heart of the Wolf is a standalone novella by D B Reynolds. I really liked this novella but that wasn’t a surprise as with all of Reynolds books I get hooked on them and absolutely love them. This novella was not with vampires instead with werewolves. It was a change from these charming Vampire Lords but not a change from the world of supernatural.

As this is a novella it is a pretty short story but throughout it all I didn’t feel that I was missing anything along a story line as Reynolds gives enough details. I only wanted more just to enjoy the story more and to find out more about these characters but from what was given you certainly were able to learn about them. I was horrified with what had happened to Kathryn and inside that sham of a marriage. What horrified me more was the fact her father did that and nothing was done to help her. I didn’t like that the father wasn’t really in the book and getting what should have been coming to him. Now Ren who was our hero of the story. He was there to protect Kathryn and nothing would stop him from finding out who was after her. I liked his determination and how he handled the situations to keep her safe.

I was kind of surprised that nothing more was written about them or about werewolves. Don’t get me wrong I love the Vampire Lords and only want more but I wouldn’t have minded more to be written about these wolves.

One thought on “Heart of the Wolf”