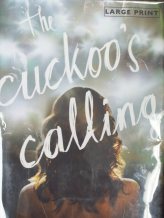 Detective Cormoran Strike has been having some bad luck with his girlfriend leaving him and his business is not providing enough income to survive. Then Strike will get some luck and get a case that should not lead anywhere as Lula Landry’s suicide was concluded by the police. Once Strike looks further into the case he will find more and more that doesn’t make sense and lead him on a path of what was going on in the supermodels life.

The Cuckoo’s Calling is the first book to Cormoran Strike series. The author is Robert Galbraith but she is better known as J K Rowling. Okay so it was unfair to compare her writing to Harry Potter but it was hard as that’s what she is known for. Personally for me the Harry Potter series was far better than this book. Now if I think about this novel just being a novel I thought it was pretty good. The problems I have with the book is that it is a little wordy for me. I didn’t want all the detail as I wanted to get to the meat of the plot and get on with solving the problem. Detail is good and handy in mystery novels but for me it was too much description.

Detective Cormoran Strike was an odd man to put it mildly but he was good at his job and was meticulous when it came to following through and detail. I liked him for the most part and thought he was well written.

Now even though I was wasn’t a big fan of the on going detail I felt that once you hit a certain part in the novel it really gets going. The mystery has been unfolding throughout the story and I have to say I had my suspects but the actual person I wasn’t guessing. The author did a good job at writing this mystery out and giving us suspects with what looked like valid motives. For me the murderer blindsided me as I was not prepared for this person but the reasons are explained and it was easy to get why this person resorted to murder.

Since I have read this book I will try out the second book at a later time just to see where Cormoran Strike’s next case will lead him.