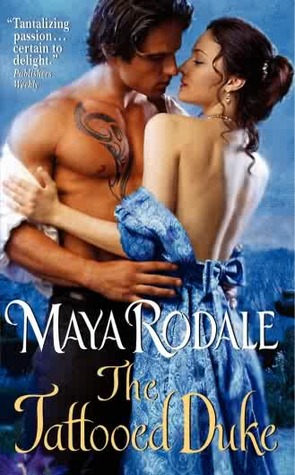 Duke of Wycliff, Sebastian, was back in London and found himself penniless and in need of a wealthy wife. He wants to get back to his expeditions and leave his potential bride to be in London. Things will not go his way when he finds himself looking towards Eliza, his maid.

Eliza Fielding was a writer for a London newspaper and in order to keep her job she had to get the inside scoop on the notorious Duke of Wycliff. Eliza will disguise herself as a maid in his household and listen to all that Wycliff says but she will find herself falling little by little in love with the Duke.

The Tattooed Duke is the third book to the series Writing Girls by Maya Rodale. I found this novel to be a great romance book. I flew through the pages wanting to find out what was going to happen next with the characters and for them to have that happy ending. Maya Rodale is a new author for me and I know immediately that I will be coming back to this author. I don’t know what it was about this book other than to say it was a fun book to read. There is passion but also lies that are being told left and right by these characters.

Eliza was a character I loved. She was a writer for the paper and she goes undercover to write her articles. You knew that this lie she was living would come to bit her so that wasn’t surprising. I was surprised by her other secret she was holding. Now Wycliff was a very unconventional Duke. He was a man who didn’t want to be a Duke and to go back to living in the tropics. He was a passionate man in all aspects and now especially with Eliza.

The passion between Wycliff and Eliza was not unheard of but for them to find that happy ending would be next to impossible for several reasons. That of course does not stop me from wanting them to have that happy ending.

Before that happy ending can happen there are some villains that had to be gotten rid of, which were Liam, a man from Eliza’s past, and Lady Althea, a woman from Wycliff’s past. Personally both of these people were dangerous in their own way, but Liam topped it with the violence against Eliza. Lady Althea was a conniving woman who was out for the prize which she deemed was Wycliff.

Okay so personally I wasn’t warming up to the editor Knightly but I am certainly looking forward to reading his story which is the fourth book. I want to know more about him and about Eliza’s fellow writers. As I said above I will be without a doubt coming back to this author to read the other three novels from the series Writing Girls.