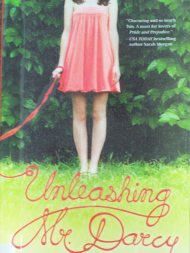 Elizabeth Scott was taking a leave of absence that was being enforced by her job as she was on probation due to a scandal. Elizabeth was able to enjoy herself some as she puts her dog through dog shows. She will find a new job opportunity in England which will keep her in proximity of Donovan Darcy who had mad and wanting him.

Donovan Darcy was judging another dog show but this time it was different. He will meet a woman who will have him smiling and annoyed at the same time. He will be surprised to find her in London and Donovan will want nothing more than to spend more time with the woman who was driving him mad.

Unleashing Mr. Darcy is a standalone novel by Teri Wilson. I absolutely loved this book. There is certainly parts of this book that are familiar to Pride & Prejudice with scenes that are very much like the classic story, but Wilson makes her own story.

It was a charming tale that happened between Elizabeth and Donovan and how dogs brought them together. I liked the instant dislike that Elizabeth had for Donovan as based on her own experiences with the wealthy. The dislike does not go away as Elizabeth is stubborn and nervous about letting him get closer. Donovan is not the stuck up man you would think him to be. He is a fun guy to be around, a little serious, but that was too be expected as he had to grow up fast when his parents died. I love his kindness with animals and that is shared with Elizabeth which does bond them.

Their relationship is anything but a fairytale as Elizabeth doesn’t always like him and Donovan finds her annoying. Of course they work it out and then more bumps in the road happen. Donovan will be persistent in his pursuit of Elizabeth and you can’t help but sigh over his attempts and want a Donovan for yourself.

The villains are certainly Helena and Grant. Helena was the jealous one when it came to Elizabeth as she wanted Donovan. She will do anything to get rid of the competition. Halfway through I was thinking I bet Grant will be making an appearance. He does as his part in the story wasn’t quite finished. I really wanted these two characters to be kicked to the curb and thankfully Wilson will not disappoint.

After such an enjoyable story I want to read more but am hesitant as sometimes you read such an amazing book and the next one is not up to those standards which I doubt. You just never know. Though I have a feeling I will be back for another Teri Wilson’s book because I am curious about the other books she wrote about.