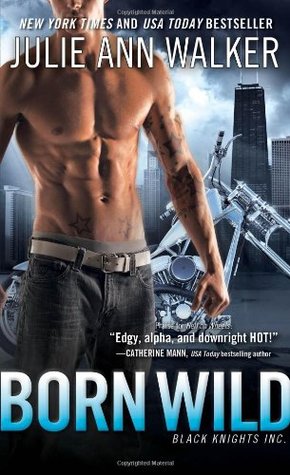 Eve Edens knew that her accidents weren’t just accidents but no one believed her at the police station. She will go to the one group that she knew could help her even though seeing Billy always breaks her heart. She still loves him even with twelve years between the last time they had been together.

Billy “Wild Bill” Reichert could not help be angry with the woman who had broken his heart but to see her in danger he could not just stand by. He will help her find out who is the person harassing Eve and get closer to her than he had in twelve years which will make him realize how much he still wants her.

Born Wild is the fifth book to the Black Knights Inc series by Julie Ann Walker. I was waiting for their story because I knew it was coming and although this story was predictable with certain parts of the, especially with how Eve and Billy were separated, I enjoyed the book.

Eve has been a character in the series but mostly on the side as Becky’s friend and something else when it came to Billy. I liked that Eve had progressed throughout the series and she became stronger and could stand up to those who were manipulating her. Billy was a wild card but a good guy and one who could hold a grudge. I liked that he was someone you could count on and was good at his job. Now in the midst of it all there is that sexual tension which had been there all along will explode as danger comes closer. There will be fireworks when Eve and Billy finally get to be together again after twelve years.

As I said above it was predictable with who was doing the manipulation to keep Eve and Billy apart but I was surprised with who the person was behind the attack on Eve. Walker does a good job at keeping us focused on the most likely suspect while the actual one was able to be undetected until the very end.

Well as I have now gone through five books from Julie Ann Walker I am going to take a break from the author let the books build up.