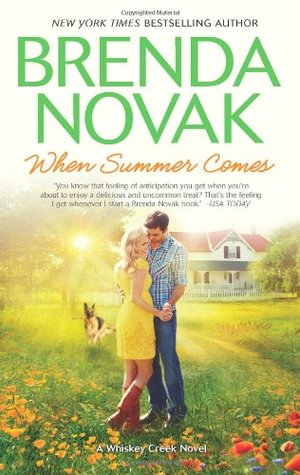 Callie Vanetta is dying from a liver disease and she knows the probability of getting a transplant are slim. Callie has made peace with that and now just has to let people know. She will live at her grandparents farm house and will be surprised when a stranger knocks on her door asking for help. Callie will help the man even though most tell her not to but she is worried that she will start to feel something for him.

Levi McCloud needed help after a dog attack and will find it with this woman. He will want to leave Callie’s place as soon as he can because he doesn’t want to bring trouble her way or feel anything for this woman.

When Summer Comes is the third book to Whiskey Creek series by Brenda Novak. I really liked this book. Even though this book was sad, I mean how could it not be, with Callie dying it was a very good book.

So Callie’s character is dying and she has to start to say goodbye. With the aspect of dying I feel Callie is still upbeat in a way but it was really to keep up with appearances. I wanted her to find a transplant and I knew that she would at the end but with how Novak was writing the possibility was not looking great. Now Levi was a mystery. His story started to unfolded and you found out more about him. He was a broken man with all that had happened to him in the past. I liked that he was becoming more of the man he used to be with Callie.

With someone dying a relationship seems impossible but Callie and Levi have one starting. It helped that Levi didn’t know what was happening but he knew something was wrong.

The ending was what I expected but that is not to say there were no tears shed. I felt myself tearing up towards the end. Novak made the ending touching and emotional but ultimately an ending that was just right for the book.

With the third book done I am on to the fourth with Noah.