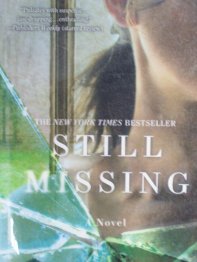 Annie O’Sullivan was closing up her tour when a man will ask to view the house. She will give him the tour but soon will find herself at gunpoint. She will be taken to a cabin and will find out she wouldn’t be coming home for a very long time. Annie will survive a year in this man’s cabin where she was beaten, raped and ordered around. When she finds her escape she will find that coming back to her old life will not be possible as she will never be the same woman.

Still Missing is a novel by Chevy Stevens. This book was read for my book club and it looks like we are back to the psychological thrillers. Personally I don’t mind as I like these stories with their twists that you don’t see coming and yes they are at times very uncomfortable but they make you think. There is also a lot to discuss with these kind of books which is ideal for a book club.

So first thoughts on this book was that it was a gripping intense thriller. It made me nervous and I literally got up and made sure my front door was locked.

Annie was a fighter and what I liked about her character was that she felt real. The things she had to do in the book were unbelievable horrible and I couldn’t believe how brave she was to fight him and then give in to save another. I cringed each time Stevens talked about what was going on to Annie. I cheered for her the entire time to survive and find a way out. Also you know that she escaped as the book goes back and fourth from past to present and in the present she is telling her psychologist the story of what happened to her. So you know she did escape which helped me when reading the book.

Now there were characters I liked and disliked throughout the book. Obviously the man who kidnapped Annie was one I hated but there was another person who I didn’t like. That was Annie’s mom. She was way to selfish and made Annie feel like crap for not caring when it should be the mom caring for her daughter. The mom will show signs of caring but then be selfish again. It is always about the mom and never anyone else. One person I liked a lot was the cop, Gray. He was tough but caring and he did the job right. I liked that he didn’t treat Annie like a permanent victim especially when they met the first time.

So the villain is obviously this mystery man who kidnapped and raped Annie for over a year. He was scum and a sick sadist. I was thrilled with how in the end Annie dealt with him and escaped. She was a true fighter, but it seemed that she was not done fighting. I was wondering how the story would be continuing as she escaped around half way through the book. So what was going to happen now? It could have been all about Annie and how she had to cope with it all. Now it was that but it looked like trouble was not over for Annie as another attempt to kidnap her happened. I was shocked. The question then becomes what is going on? I found it interesting that it went towards the route that someone had this all planned, someone possible close to Annie. So I wouldn’t say who was doing this to Annie but there is someone behind it all. You will find out and be disgusted by this person, at least I was.

The ending, well I really wasn’t sure how it was going to end but I thought Chevy Stevens ended the book appropriately. There was enough there to let us know that Annie would be alright or at least on the way to being alright.