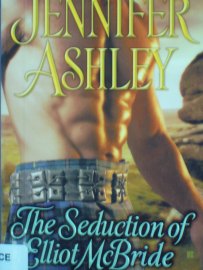 Elliot McBride was there to stop a wedding but as the groom left Juliana there was no need. All he needed to do was take the grooms place. Elliot needed Juliana, would make her his and bring her back home to keep the demons away.

Juliana St. John has loved Elliot McBride, her childhood friend, forever. She never imagined she would marry him but at the alter she stood. She will find that the Elliot she knew no longer existed but that did not stop her from loving this one or trying to help.

The fifth book, The Seduction of Elliot McBride, from Jennifer Ashley’s series Highland Pleasures was very engaging. I think this is a series that all the books really can be read on their own, you miss the connection of family but Ashley writes the book so they are mentioned again.

I could not get enough of the characters of Elliot and Juliana, especially Elliot. The book might not have had the temperamental MacKenzie around the entire story but Elliot does have a similar style to those brothers. I think its because he kind of reminded me of Ian who was the first brother I read about and had me falling in love with the series. The interaction between Elliot and Ian was slightly comical as they were almost acted the same due to the treatment they received in the past. Due to that past Elliot is a very strong character with lots of flaws and pain that he is trying to hide and handle by himself. Juliana I thought was another strong character. She did not back down when she found out what was going on with Elliot. She fought harder to help save him.

There is danger that also lurks around in the book. Danger that is following close to Elliot but it is not from the obvious enemy that is given.

I want more from the series now that I have finished Elliot’s story. Daniel MacKenzie’s story is coming out in November who is Cameron’s son. Daniel has been in the series since the beginning and I can’t wait to read about him as he has grown up.

2 thoughts on “The Seduction of Elliot McBride”