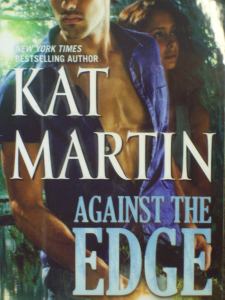 Ben Slocum had no idea that he had a son, a nine year old son who is now missing. He will team up with a social worker Claire and will try to keep it professional but can’t seem to stop thinking about her.

Claire Chastain needed to find Sam and the only way to do that was to get Ben to help. Going to Ben was risky but she had no other idea. Claire had a feeling that he would not be one to leave his son to die in the arms of the kidnapper.

Against the Edge is the eighth book of the series Raines of Wind Canyon by Kat Martin. I had already read the book Against the Odds which started the need to read this series. I re-read the book again just so I was reading the entire book order. So back to Against the Edge which was a very good book. I think that Ben was the most frustrating man out of the group of the tough guys. He was making all the wrong choices or saying the wrong things. Of course things do go better at the end when he learns how to express his thoughts correctly and Claire will take that chance. Claire was someone who did not give up but knew when to cut her losses.

Now aside from the two characters of Ben and Claire who I loved there was Ben’s son, Sam. I really liked his parts that Martin wrote in the book. You got to read how strong this little boy was and how brave. I loved the interaction he had with the dog Pepper.

Now the villain was plainly obviously because you knew he was the one who took Sam. What you didn’t know was his real name or where he was going. Martin leads you on a hunt for Troy which was written well with all the clue Ben and Claire find.

I am taking a break from the series as there is only one more to go but it has come to my library yet but I am looking forward to continuing the series Raines of Wind Canyon.