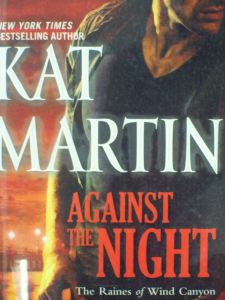 Johnnie Riggs is on assignment when he finds a dancer he wants. Exotic dancers were never his thing but this woman pulled him in with begin confident on stage and almost shy on the floor. He will find that Amy is not all she seems to be and in way over her head.

Amy Brewer took her sisters job in hopes to find a way to locate her sister who disappeared. Amy will be out of her element when dancing and investigating but will find help with Johnnie. They will keep going with the clues they find even with danger breathing down their necks.

Against the Night is the fifth book to Kat Martin’s series Raines of Wind Canyon. I keep going with the series and with every book Martin keeps the action, romance and the adventure continuing with those tough guys you love to read about. Johnnie was no exception to the rule. He was a tough man who knew what he wanted and that included the woman Angel or really Amy. Now Amy’s character is a contradiction and really fun to read about. She has fire and naivete all in one.

Now for me I think this had a little more violence in this one but there was a good plot and good characters. There was also a good amount of sex but the action of the situation kicks up and the plot becomes intense. There are some very intense scenes that will have you biting your nails and wonder what will happen next. The scenes become gritter when it comes down to the sister, Rachel. You weren’t sure throughout the book what would happen and if she was alive. You find out half way through the book and what happened to the sister is horrific but there will be justice seen for the villain of the story. Against the Night will be next.