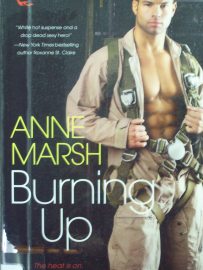 Jack Donovan is a smoke jumper and was asked to come home. Immediately he dropped everything. He will be back to work on fires that were starting up for the summer but some will be connected to the woman he walked away from.

Lily Cortez left San Francisco and driven out by a stalker who wants her. She had no idea who the person was but thought going home would bring peace, not knowing that is where her stalker lived. Lily will find comfort in her childhood crush but knows that she has to stay away as she could not risk loving him and losing him.

Burning Up is the first book to Anne Marsh’s series Burn. From the looks of the cover you would immediately think sex and strong sexy men and pretty much that is what is going on in the book, and if its not sex there is the sexual tension between Jack and Lily. Now it was good but it didn’t pull me in right away, of course at the end I was all for the series. I think what didn’t pull me in right away was the almost too cocky attitude that Jack had and was a little too dominating with Lily. He was doing it that way because he is the tough Jack and doesn’t hold back but it took a little to get use to.

What I thought was done well by Marsh was the way she described the job in the book for these smoke jumpers. It was interesting to read about and it held that danger making you want to read more. There was also the angle of the stalker which again was well done. You don’t find out who he is until more than half of the book is written but it takes them to almost the very end to stop the stalker and the fires he is obsessed about.

At the time I  picked up Burning Up I got the second book which is great as I definitely want to read more on this series and find out about the rest of the brothers. Ethan will be next in Slow Burn.