Cade Gallari was not the same stupid teenager who made a pointless bet but he wasn’t sure if Ava believed that he had changed. With filming the documentary he would prove he changed as he still wanted Ava as there was fire that had not disappeared even after thirteen years.

Ava Spencer was devastated back in high school but she had come a long way from the plump girl. Now thirteen years later the boy who broke her heart was back and needed her help. Ava would help but keep her distance as she was not sure he could be trusted though with each look she felt her control crumble. 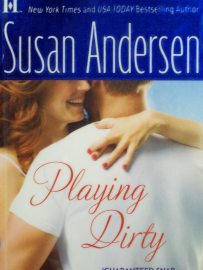 Playing Dirty is the third book of the Sisterhood Diaries series from Susan Andersen. I liked this book immediately as it stirred an emotion of fury which I had felt back in high school during my freshman year. Personally I think no matter what high school is hell for most even if they don’t want to admit it. In Playing Dirty Susan Anderson does a fabulous job with recreating a situation that is very real in a high school with the upper and lower status of the students.

You wanted to hate Cade for what he had done to Ava in high school but then you always wanted to shake Ava as to say that he is not the same person you had known and it was time to let it go. Throughout the book I found myself flipping the pages enjoying each scene that Andersen created. There was a little humor, passion and a mystery which followed the book. I thought the mystery of the diamonds gave a nice ending to the book and series.